It was my dad’s birthday on Friday last week (I was really bad and forgot to call him because I’d just talked to them on Thursday, so I didn’t think to call again).

Both Mom and Dad called earlier to command me (I kid you not, it was in that “obey or be grounded” voice that I haven’t heard since I was fifteen) not to send them anything for Dad’s birthday or Mother’s Day this year.

Well, being Japanese, I can’t not give them something. It just isn’t done! There are serious guilt issues in play here that have been passed down for thousands of years to little Japanese girls.

So I decided to make them something for the dog.

It’s not technically for them, and it’s inexpensive so they can’t complain about my spending too much money. But I wanted to send them something kind of frivolous.

Now, it’s getting massively hot in Hawaii right now, so my wool yarns were out, but I had some nice cotton DK weight and some extra eyelash yarn in my stash (Yeah! I love stash-busters!). I used the Lion Brand Fancy Fur dog sweater pattern.

Here is the finished product. 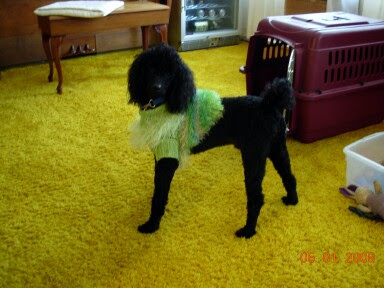 Um … it didn’t turn out exactly the way I wanted it to. I didn’t realize how long Kuro’s body is, so the sweater is horrendously short. It’s more like a shrug than a sweater.

You can’t see it, but he also started trying to get the darn thing off as soon as they snapped the picture. Well, it is May in Hawaii, can you really blame the poor guy?

Anyway, Mom and Dad called on Thursday last week laughing because the sweater was so “cute” but “a little girly” (Kuro is a he). It’s also a bit big in the neck.

Well, at least the dog has something sort of green in color to wear to the University of Hawaii football games.