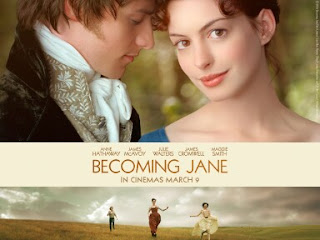 I’m catching a cold, so I took time off from writing my proposal to watch the movie, Becoming Jane with Anne Hathaway and James McAvoy. 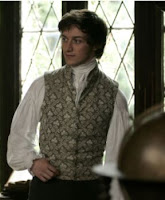 James McAvoy is my new favorite actor. Oh my gosh he was so good. So charming, so intense, so handsome.

Anne Hathaway was good, as usual. My problem was her lines. I think the writer failed Jane Austen in the dialogue.

In Miss Austen Regrets, the dialogue fitted Jane Austen to a T. The character spoke the way Jane wrote in her letters and her books.

In Becoming Jane, where was the biting wit, the quirky observances, the understated irony? Anne Hathaway had all these earnest lines. All this drama and romance.

In reading her writing, I thought Jane always came across as a bit cynical. Maybe it’s just my perception, and really, a writer can’t be understood only from her written word, much less her fictional works.

But Jane’s character came alive for me in Miss Austen Regrets (although I have to admit some parts of that were a bit more melodramatic than I think Jane’s real life character was). In Becoming Jane, it was a nice, entertaining story about a heroine named Jane.

Now, I know tons of you have seen this movie and loved it. So speak up! What did you like or didn't like about it?