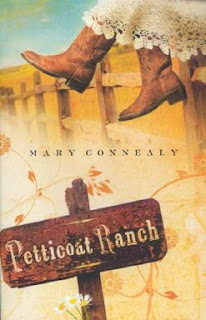 Sophie Edwards is doing just fine, until a strange-yet oddly familiar-man rides into her life, insisting on rescuing her and her four daughters. Can she find a way to love a headstrong mountain man? When Clay McClellan discovers his brother has been murdered, he's bent on finding the killers and seeing them properly hung. But first his Christian duty demands that he marry his sister-in-law. After all, Sophie needs someone to protect her - right? Faith and love help unruly wed newlyweds find common ground and a chance at love on the Texas frontier.

I have to say upfront, I normally don’t care for Western historical romances. They just don’t float my boat.

However, this Western historical romance was a lot of fun, because the female characters were awesome.

Sophie and her girls are sensible, tough, capable, skilled, and smart. They are some of the best historical romance heroines I’ve ever read. It’s so nice to read a woman who’s so independent and capable, rather than a typical mothering type.

The hero is okay, Clay’s a little too bull-headed for my taste. I also didn’t quite understand why Sophie and the girls were so careful of his feelings when he wasn’t particularly careful of theirs. However, his panicked reactions to typical female behavior is hilarious and adds a lot to the family relationship.

The storyline moves quickly and the inspirational thread is quite nice. There are a few times it gets a bit preachy for my taste, but on a whole, the characters’ relationships and issues with God are what I can relate to.

I especially liked this book because it’s one of the few humorous Western historical romances I’ve seen—the majority of them are more serious, whereas the entire way through this story, you can tell the author likes poking fun at her characters. It’s highly entertaining to have characters who don’t take themselves very seriously.

This is a great read—I finished the book in a couple sittings. I would have no qualms about giving this book to a reader as young as junior high school, because the content is clean and appropriate, and young readers would appreciate the humor as much as an adult reader.