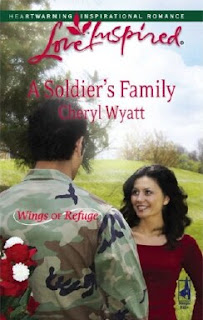 Today I have an interview with contemporary romance author Cheryl Wyatt! Cheryl writes about Pararescue Jumpers, the unsung heroes of the Air Force.

On A Crash Course With Love

She was the woman of pararescue jumper Manny Pena's dreams. But he'd stuck his foot in his mouth the last time he met Celia Munoz. Now, grounded after a parachuting accident, he was desperate to make amends with the beautiful widow.

But Celia wasn't having it. The last thing she needed was another man with a dangerous job—even if he had given his life to God. Yet

Manny's growing commitment to her and her troubled son began to convince her that perhaps she should take her own leap of faith.


And now, here’s me and Cheryl!

The early title was House on Haven Street because Manny was originally going to recover in an off-season runaway shelter that was located in my fictional town of Refuge on....tada! Haven Street! :-)

If Celia were a sundae, what ice cream, sauce, and toppings would she be?

Is there a such thing as Jalapeno supreme? LOL! She'd be a hot fudge sundae with extra cherries on top because her favorite color is red.

If Manny had a pet turtle, what would he name it and why?

Shelly since he's practical. Or Gimpy because, chances are...he found the turtle upside down in the road and probably saved it since he's such a rescuer...and also because he was hurt in a skydiving accident and doesn't want anything to have to suffer. LOL!

What books are you reading right now?

Only Uni of course! Just finished A Passion Most Pure by Julie Lessman and Missy Tippens' Her Unlikely Family. Getting ready to dive into Debby Guisti's MIA-Missing in Atlanta...and Mary Connealy's latest book.

Go back to Disney where I can sit by the pool every evening and write while my family splashes around.

Camy here: I’d be in Disneyland with you! Thanks for being here with me!