This is, I believe, a “bitter melon” (it’s an Asian vegetable, and it’s actually called that). If it’s not a bitter melon, it’s a winter melon. I can never remember which is which. It’s squash-like. 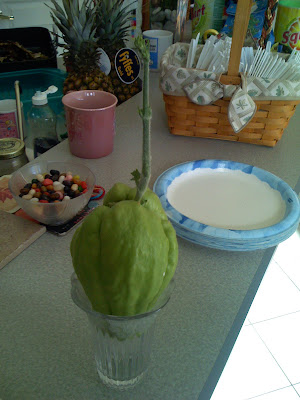 Someone gave it to my sister-in-law, but it wasn’t used in whatever Chinese soup they made for Christmas dinner. I know it’s a commonly used vegetable, but I’ve certainly never cooked with it. 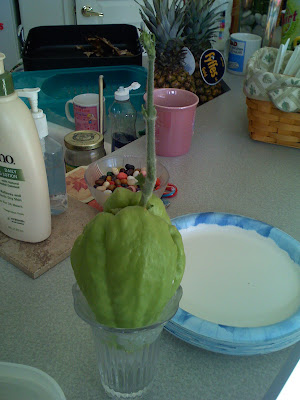 The problem is that once she got it, my sister-in-law noticed this funny fuzzy sprout growing out of the top. So she stuck it in a glass and watched to see if it would continue to grow. 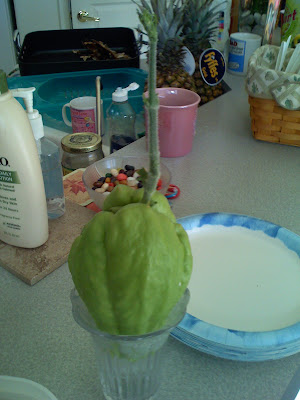 She didn’t water it. She didn’t do anything except stick it in a glass. And it’s looking like some space pod from an alien planet, getting ready to jump out and body-snatch everyone in the house.

We watched the fuzzy sprout grow another couple inches in the two days we were at my sister-in-law’s house. Who knows? Maybe I’ve contracted some extraterrestrial disease it was carrying in its spores.

I fondly called it “Hairy.”

Thoughts from the peanut gallery? At least help me brainstorm a nicer name for the poor guy. 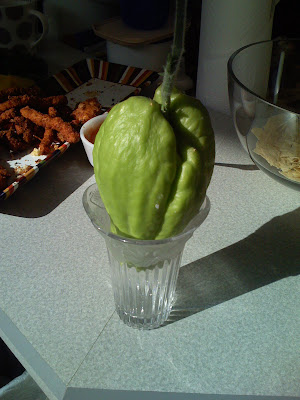