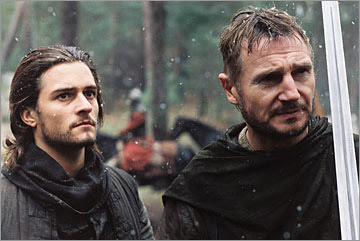 It also has other favorite actors of mine—Liam Neeson, Jeremy Irons, David Thewlis (I just adore him in the Harry Potter movies), and Edward Norton as King Baldwin (LOVED him in this role. I was mesmerized).

Christianity is mostly portrayed as hypocritical (no surprise there, when is it ever portrayed as the good guys? I mean, I know Christians aren’t perfect and there are lots of times Christians or those who call themselves Christians act hypocritically, but why can’t Hollywood ever show someone as both a strong Christian and a good guy? Both good and bad Muslims are represented on the silver screen—why not a good Christian for a change? Sorry, rant is over).

I had a hard time keeping people straight sometimes—maybe it was the chain mail and helmets on everyone??? And I didn’t like the adultery part. And Captain Caffeine would have loudly protested that some parts were downright cheesy while other parts were gorier than a horror flick.

But the movie left me with that Aaahh feeling at the end of it, so that’s good enough for me. I liked seeing a historic event I’ve only read about in history books.

I also got a great quote from the movie that I added to my Favorite Quotes list.