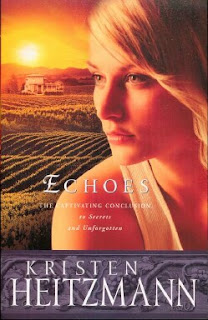 ECHOES is the conclusion to SECRETS and UNFORGOTTEN. Even in the midst of her affectionate and chaotic Italian family, Sofie Michelli feels alone. For too long, she has been caught in a net of loss and despair. It is time to let go, to start again.

Rese is not sure what to make of Lance Michelli's healing gift, but she feels protective of this humbled version of the swaggering man ho turned her life inside out. As they find new footing, the Sonoma villa she renovated becomes a refuge for the downtrodden—including Lance's sister Sofie.

Driven to protect the innocent, Child Protective Service worker Matt Hammond reserves judgment on the unconventional caregivers of the abandoned infant—who both concern and fascinate him—but he is especially drawn to Sofie, the mesmerizing woman with a dancer's poise, eyes like dark copper pennies—and scars on her wrists.

To read a chapter from this new title go to ChapterAWeek. If you don't belong to Chapter a Week, it's easy and free to join! Just click here.