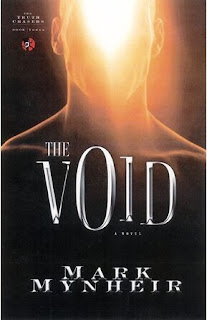 Today I have an interview with Mark Mynheir about his novel,
The Void (Truth Chasers series book 3).

Florida Department of Law Enforcement Agent Robbie Sanchez devotes her life to crime prevention, and it shows: She has no personal life and doesn’t know the meaning of a day off. After all, someone has to be around to clean up the mess crime leaves behind.

So when Officer Brad Worthington is brutally murdered, Agent Sanchez is called to the scene along with Brad’s best friend, Detective Eric Casey. The two turn to Lifetex, the genetics lab near the scene, hoping their elaborate security system might have captured the crime outside.

But what’s going on inside the lab is far worse: a renegade scientist is cloning humans! As Robbie and Eric pursue clues–and a growing attraction–they are caught in a deadly battle as the clones begin to act on their own volition…but this battle threatens to claim more than human life; the clones are vying for human souls.

And now, here’s me and Mark!

Tell us about the Truth Chasers series and how The Void fits into it all. How'd you come up with the idea for The Void? I mean, human clones--how cool!

I was reading an article on the internet about cloning. I’ve always been a bit fascinated with the subject, so I wondered what’s going to happen when humans are successful. Will cloned humans have spirits? If they don’t, could demons enter them? With no human spirit to contend with in a genetically perfect body, what havoc could these beings wreak on the world? And how would they be stopped? With that, the idea for The Void was born.

What's your favorite scene from The Void?

When Dr. Neal Meyer comes to the realization of what he’s truly dealing with and how far their work has gone. I had a lot of fun writing some of the final scenes as well. I don’t want to give away too much, but let’s just say it gets pretty “intense” at times. It’s a cop thing.

If you were manning the grill at a family barbeque, what would you be mostly likely to cook, and would it be edible?

I’d cook hotdogs and would have everyone present sign a waiver, relieving me of any civil or criminal liability. Whoever was left after that would have to have strong teeth and a Teflon stomach because I don’t cook at all—even on the grill.

I have a very disobedient pound puppy who thinks the squirrels really want to play with her. Do you have a dog, and if the answer is no, why not?

I have a hyper (and sometimes psychotic) mini-pincher named Coco. I wanted to name her Cujo, but my wife and kids won out.

Randy Alcorn’s Deception. And it’s fantastic! Tom Morrisey’s In High Places is next, with Demon: A Memoir by Tosca Lee in the bullpen.

I enjoyed meeting you at the International Christian Retail Show in Atlanta this year. I had a blast as usual. Thank you for inviting me on your blog, and I look forward to seeing you again soon.

Camy here: Thanks for being here, Mark!