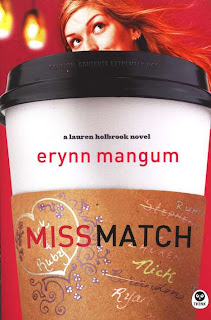 Today I have an interview with author Erynn Mangum about her novel, Miss Match!

Lauren Holbrook has decided to add a side career to her regular job as a photographer: matchmaking for the romantically challenged. After successfully hitching her sister and her new husband, Lauren decides to sets out to strike sparks between her carefree singles' pastor, Nick, and her neurotic, obsessive compulsive coworker, Ruby.

However, Lauren finds that certain combinations of people results in explosions, rather than sparks, and her foolproof plan begins to unravel. As Lauren is faced with disaster after romantic disaster, will she rethink her matchmaking role as well as her vow to her father to remain single forever?

And now, here’s me and Erynn!

Tell us how you came up with the idea for Miss Match.

I was at a friend's wedding. He was my singles' pastor, and she was our former youth secretary. They were one of those couples everyone knew was going to get married long before they ever got engaged and right before they did, I remember saying, "They just need to get married!". I was thinking about this at their wedding and decided to write about a matchmaker with a definite Emma-like tone to it!

Who came up with your cute novel title--you, your marketing team, or the elf you have trapped in the basement?

Actually, if I remember correctly, I think my dad did. Which is really funny because he's never read the book! :)

If you were a dessert, what would you be and why?

I kind of feel like quoting Shrek here about parfait and onions. :) I would be a slice of chocolate pecan turtle cheesecake because there's so much going on with that dessert, it's hard to focus on just one thing. Sounds exactly like my brain.

Who would you want to be marooned on a desert island with and why?

Flipper. He could take us both home!

If you could star in any movie (let's just pretend you're Golden Globe quality)--what movie, which character would you be, and why?

Okay, DEFINITELY Hairspray! Any of the characters would be so much fun to play - they get to sing, dance, wear adorable outfits and generally have a great time!

Thanks you, Camy! This interview was so much fun! :)

Camy here: Thanks a bunch, Erynn!