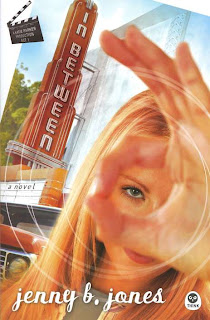 Today I have an interview with Jenny Jones talking about her debut novel, In Between.

A Katie Parker Production (Act I)

Katie Parker knows life isn't fair. After all, when your mom's in jail and your dad's a no-show, you figure things just aren't going your way. But hey, she can deal. Then she finds out she's being sent to live with a foster family—in In Between, Texas.

What kind of town has a name like In Between? And what kind of family wants a kid like her? One thing's for certain: None of this will be good. Sure enough—thanks to some new "friends" and her non-Mom's crazed mother, Mad Maxine—life sails right past bad to stinking. Then again, she's just a temporary kid, they're just temporary parents, and she definitely doesn't have any ideas about making any of this permanent. God, on the other hand, may have other plans altogether.


And now, here’s me and Jenny!

What inspired the storyline and characters of In Between?

I love this question. I was blessed with the opportunity to start a drama program at a high school I taught at some time ago. We saw kids coming into their own, using talents they didn’t know they had and just many A-ha! moments. I had a student who found her place through drama—something she discovered she totally rocked at. But then I also had a student, “Maggie,” who got “stuck” in the class and though she did her best, it wasn’t her cup of tea. I will never forget the night of the play for the community. The kids got a standing ovation, but “Maggie’s” family didn’t show. I remember thinking, much like if a tree falls in the woods and no one is there to hear…if a kid gets a standing ovation and no one is there to see her… Anyway, that has always stuck with me. “Maggie” was later taken out of her home and placed with a friend’s family, where she was thoroughly loved and cared for and received the attention that she had never had before. She became a new person. My character Katie is a combination of both those students I mentioned. Their stories are etched on my heart. So In Between steps into the life of a tossed around foster kid who discovers her place in this world, on stage and off.

Is this the manuscript you pulled from the 2006 Genesis contest because it was contracted? (Insert blatant plug for the Genesis to gratify my heart. :)

Yes, this is it! That was bittersweet. I was really, really excited about entering the Genesis. I really encourage anyone to do so. The feedback that I got from my entry (that had to be returned) was still very helpful and encouraging. And the contract came about because of a contact made at the ACFW conference in 2005, so all the way around, ACFW is a great thing to be a part of. In fact, I have an ACFW tattoo on my…nevermind.

Do you munch on anything while you write? If so, what? If not, why not? (Camy is looking for brainfood ideas because carrot sticks and celery ain't cutting it these days, and M&Ms are EVIL)

I have been soooo bad lately. I’m a teacher, and when I’m in that routine, I’m pretty good about what I eat—lots of clean foods. But on summer break, it’s like I vacation from the food pyramid. But I do chew a lot of Orbit gum and drink a ton of tea. Sometimes apple slices will fool my taste buds into thinking we’re eating something sweet. And apples are good with almond butter (which is really healthy, but maybe not so much if you chase it down with a candy bar?). I just got off a popcorn kick. That’s about all I can think of. I bought carrot sticks to munch on, but they are growing fuzz.

If you were an ice cream flavor, what would you be and why?

Ben and Jerry’s Chocolate Brownie Chunk. Just because it’s so fabulous and everyone loves it (not that I think that describes me). And it’s got a variety—ice cream AND brownies. Who couldn’t be happy with that? And it’s really fattening, but you look at that little pint, clutch it to your chest, and say, “You are worth it.”

If you had a pet elephant, what would you call it and why?

Snarky Floogle-rumpus. I would share with you why, but it’s a painful, painful story about a former elephant of mine. It’s still too raw for me to talk about. Thanks for bringing it up.

Quick, what novel(s) are you reading right now?

I’m on a self-imposed reading ban as I finish up a deadline for book three in the Katie Parker Production series, The Big Picture…but I just got Melody Carlson’s These Boots Weren’t Made for Walking in the mail, and I have to admit I cracked that open just ten minutes ago. Other books in my to be read pile include The Kite Runner and Spells and Sleeping Bags, the coolest, funniest YA series ever by Sarah Mlynowski.

Book two in the series, On the Loose comes out in September. In the meantime, you can find me at my blog http://www.jennybjones.blogspot.com and twice a month at http://www.girlsgodgoodlife.blogspot, which also features our lovely hostess, Miz Thang, Camy Tang! Thanks a lot for letting me drop by. This was fun!