Interview with Anne Dayton and May Vanderbilt 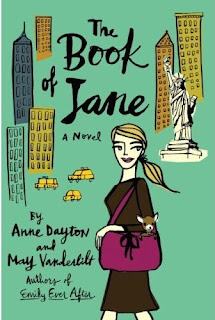 Today I have an interview with chick lit duo, Anne Dayton and May Vanderbilt talking about their latest novel, The Book of Jane.

Jane Williams is the happiest woman in New York. She has a dream job, a perfect Manhattan apartment, and a man she wants to marry. Her whole life is mapped out to the finest detail, and things just can't get any better. But in a New York minute, everything changes. After an evening on the town with a hot Hollywood actor her PR firm is wooing, she wakes up to a day filled with strange occurrences—a weird mark on her face and a red-haired woman who seems to be following her every move. This bizarre day turns increasingly horrible, and over the course of it, Jane loses her boyfriend, her best friend, her job, her home, maybe even her dog. Unsure of why she's being tested, Jane struggles to hold herself together while her world falls apart. Has God forgotten her?

In this witty and contemporary retelling of the story of Job, Jane discovers what she really wants, after nearly everything she holds dear slips away. Filled with the sophistication and excitement of city life, but sprinkled with humor and strong values, this new novel from the Dayton/Vanderbilt team charms, inspires, and warms the heart. 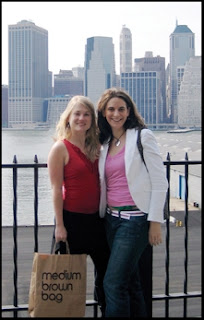 What gave you guys the idea for The Book of Jane?

May: I have this Magic 8 Ball and... Actually, we really wanted to show an "It" girl who loses it all.

Anne: We’d already retold the story of Esther (Emily Ever After) and Samson and Delilah (Consider Lily), and we wanted to tackle story that would be really awesomely horrible if it happened today. And everybody knows Job. It’s such an iconic story. Plus, everyone loves to see the person on top take a tumble.

May: The eerie part was that as soon as we started writing Jane, my whole life fell apart, just like hers. I couldn't find a steady job, my grandpa died, and I moved across the country away from all of my friends. Jane had it worse than I did, but this book was very real to me as we wrote it.

What was your favorite scene(s) from The Book of Jane?

May: Does it make me evil if I say the scene where her boyfriend dumps her? I think I can say that because Anne wrote that scene and she made Jane's pain and humiliation so visceral. And I've been hurt by love enough to be able to read a scene like that and just want to die for her.

Anne: I actually really liked the one were Jane is watching her future sister-in-law try on wedding dresses (May wrote this one). I think it’s pretty funny, and if you’ve ever been wedding dress shopping, you’ll understand. Plus, Jane and her mom, who are struggling to see eye to eye, have to deal with their disappointments about Jane’s life, and I think it’s a very real look at the way mothers and daughters relate to one another.

What's Jane's favorite dessert and why?

May: Jane doesn't eat dessert! That's how she stays so thin! I mean, if she ate dessert and still looked like the book cover, God wouldn't be very fair, would he?

Anne: May actually looks just like the girl on the book cover and eats dessert, and trust me, it’s totally unfair. But there is one scene where Jane has crème brulee with espresso. She’s immune to caffeine after so many years of long hours. I think May write this part, because I would never have a character drink coffee after mid-afternoon unless it was decaf.

What are you guys' favorite desserts and why?

May: Wow. It's so hard to choose! I love really high-end, double-dark chocolate truffles. I also love cheesecake from the Cheesecake Factory. And the entire dessert category known in my world as: Stuff with Kahlua in It.

Anne: I like chocolate as much as the next girl, but I prefer to fill up on fatty, salty foods and go of something lighter for dessert. Basically I like various combinations of vanilla ice cream and fruit. Or just fruit. Or just ice cream.

Writing as a twosome must be hard. Fess up, how often have you wanted to kill each other, and does living on opposite sides of the continent prevent you from committing homicide, or do you have clever ideas about how to hide the body?

Anne: People always think it’s really hard to write as a pair, but I love it. I mean, hello, you only have to do half of the work! But yeah, there are always things that come up. I think living on opposite sides of the country makes it harder than it was when we saw each other every day. It’s a lot easier to have a serious discussion in person than over the phone or e-mail. But it works, because May is awesome—a fantastic writer and a great friend. At the end of the day, I know she’d do anything for me, and I’d do the same for her.

May: May: I think it is my greatest compliment to Anne that I do sometimes want to kill her. I'm a middle child so to get me to that level of anger is rare. The only other people who do it are my baby sister and my fiance. She's in my inner-most circle! And living on opposite coasts helps us "keep the magic alive" in our friendship. I blame our significant others for keeping us apart. It ain't right!

You might already know, I have a dog (Snickers is very cute and incredibly stupid), and Jane has a dog. Which of you guys have dogs, what are their names and IQs, and how do you keep them from dashing out the front door when you open it for the mailman? Oh, and any tips for what to do when she actually catches a squirrel?

May: It's me! Jane's dog Charlie is named after my old boss (not kidding!) but is based on my adorable Chihuahua Buster. Buster has a genius-level IQ but the heart of a mouse. He once got beat up by a cat (a cat!) and to this day will shiver and shake in fear if I say the cat's name to him. And like Snickers, if I open the door for a mailman, he darts. I have no tips except maybe call the Dog Whisperer?

Anne: I don’t have a dog, but I have two cats. They’re very stupid, and their favorite way to pass the time is destroy things. When we got them, I wanted to name them both after Biblical hussies. I thought they could be a pair, like Gomer and Rahab, or Delilah and Bathsheba, or Woman at the Well and Whore of Babylon. But while my husband agreed to let me name one of them, he insisted on naming the other. So our cats’ names are Jezebel and Pants. Yes, like a pair of pants. How that’s a better name than Whore of Babylon I’ll never figure out.

You're off the hotseat! Any parting shots--er, words?

May: Isn't Camy great? Read Sushi for One! Then The Book of Jane!

Anne: This is why we work well together. At any given moment, odds are at least one of us is paying attention.

Camy here: ROFL! Thanks for the fun interview, guys!