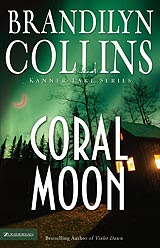 The figure remained still as stone. Leslie couldn’t even detect a breath.

Spider fingers teased the back of her neck.

Leslie’s feet rooted to the pavement. She dropped her gaze to the driveway, seeking … what? Spatters of blood? Footprints? She saw nothing. Honed through her recent coverage of crime scene evidence, the testimony at last month’s trial, the reporter in Leslie spewed warnings: Notice everything, touch nothing.

Leslie Williams hurries out to her car on a typical workday morning—and discovers a dead body inside. Why was the corpse left for her to find? And what is the meaning of the message pinned to its chest?

In Coral Moon, the senseless murder of a beloved Kanner Lake citizen spirals the small Idaho town into a terrifying glimpse of spiritual forces beyond our world. What appears true seems impossible.

Brandilyn Collins is the bestselling author of Violet Dawn, Web Of Lies, Dead of Night, Stain of Guilt, Brink of Death, and Eyes of Elisha just to name a few.

Brandilyn and her family divide their time between the California Bay Area and Coeur d'Alene, Idaho.

She maintains an informative blog called Forensics and Faith where she daily dispenses wisdom on writing, life, and the Christian book industry.

Brandilyn also hosts the blog Kanner Lake: Scenes and Beans where you can read entertaining and eclectic posts about life in Kanner Lake from Bailey, Wilbur, S-Man, Jake, and other of your favorite characters from the Java Joint. Coral Moon is the second book in the Kanner Lake Series.

The words burned, hot acid eating through his eyes, his brain. Right down to his soul.

Only a crazy person would obey.

He slapped both hands to his ears, squeezed hard against his head. Screwed his eyes shut. He hung there, cut off from the world, snagged on the life sounds of his body. The whoosh of breath, the beat of his heart.

His skull hurt. He pulled his hands away, let them fall. The kitchen spun. He dropped into a chair, bent forward, and breathed deeply until the dizziness passed.

He sat up, looked again to the table.

The note lay upon the unfolded Kanner Lake Times newspaper, each word horrific against the backdrop of a coral crescent moon.

How did they get in here?

What a stupid question. As if they lacked stealth, as if mere walls and locked entrances could keep them out. He’d been down the hall in the bedroom watching TV, door wide open, yet had heard nothing. Hadn’t even sensed their presence as he pushed off the bed and walked to the kitchen for some water.

A chill blew over his feet.

His eyes bugged, then scanned the room. Over white refrigerator and oak cabinets, wiped-down counters and empty sink. To the threshold of the kitchen and into the hallway. There his gaze lingered as the chill worked up to his ankles.

It had to be coming from the front of the house.

His skin oozed sweat, a web of sticky fear spinning down over him. Trembling, he pulled himself out of the chair. He clung to the smooth table edge, ensuring his balance. Then, heart beating in his throat, he forced himself across the floor, around the corner, and toward the front door.

It hung open a few inches.

They were taunting him.

He approached, hands up and fingers spread, as if pushing through phantoms. Sounds of the night wafted on the frigid air—the rustle of breeze through tree limbs, distant car tires singing against pavement. He reached the door, peered around it, knowing he was a fool to seek sign of them. The air smelled crisp, tanged with the purity of pine trees. The last vestiges of snow dusted his porch, bearing the tracks of his footprints alone.

He closed the door and locked it. As if that would do any good. He sagged against the wall, defeated and sick. How stupid to think they would leave him in peace. Hadn’t he seen this coming? All the events of the last few months . . .

Shoulders drawn, he made his way back to the kitchen and his inevitable fate. Each footstep drew him away from the life he’d built, reasoning and confidence seeping from him like blood from a fatal wound. His conscience pulsed at what he had to do.

The message sat on his table, an executioner beckoning victim to the noose. He fell into the chair, wiped his forehead with the back of his hand. He read the words, fresh nausea rising in his stomach. No misunderstanding their commands. They had a chess score to settle. He was their pawn.

He pushed back against the chair, arms crossed and hugging himself, the way he used to do as a boy. Dully, he stared at the window, seeing only his own pitiable reflection. For a long time he watched himself, first transfixed in fright, then with the evolving expression of self-preservation.

If he just did this one thing, his debt would be paid. They’d leave him alone.

For another hour...two…he sat, forcing down the queasiness as he thought through dozens of details. How he should do it. What could go wrong.

By the time he rose near midnight, he’d laid his plans.

Gathering the necessary items, shrugging on a coat, he slipped out into the cold and soulless night.

Used by permission of Zondervan