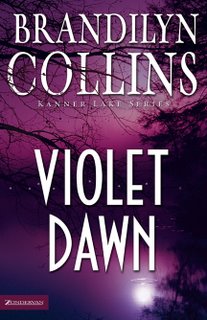 Something sinuous in the water brushed against Paige’s knee. She jerked her leg away. What was that? She rose to a sitting position, groped around with her left hand.

Fine wisps wound themselves around her fingers.

She yanked backward, but the tendrils clung. Something solid bumped her wrist. Paige gasped. With one frantic motion she shook her arm free, grabbed the side of the hot tub, and heaved herself out.

Paige Williams slips into her hot tub in the blackness of night—and finds herself face to face with death.

Alone, terrified, fleeing a dark past, Paige must make an unthinkable choice.

In Violet Dawn, hurtling events and richly drawn characters collide in a breathless story of murder, the need to belong, and faith’s first glimmer. One woman’s secrets unleash an entire town’s pursuit, and the truth proves as elusive as the killer in their midst.

This is a strong suspense novel with the kind of nail-biting chapters the author is known for, yet it has a uniquely different feel and tone from her Hidden Faces series. This is not just a rehash of her previous series but a very distinctive new one, yet just as entertaining.

The characters in this series seem even richer and fuller than the Hidden Faces series. The town of Kanner Lake is a mass of strong personalities and interesting quirks, and each person adds to the storyline in some way. Because it’s the first book in the series, the author spends some page time introducing the town, and the minor characters each have their own emotional arc through the book.

The narrative and description sucked me in so thoroughly that I could feel, taste, and smell everything Paige did. Every scene is vivid and emotional. It makes for a very engrossing read—once I started, I couldn’t put it down.

The faith element is done very well. It rises organically from the characters and never seems stuck into the story. Whether the characters are not Christian or are struggling Christians, their relationships with God are authentic and relatable.

The story didn’t seem as fast-paced or as graphic as the Hidden Faces series, but the nature of the crime and the non-law-enforcement nature of most of the characters’ occupations adds a fresh flavor to this new series. These are everyday people shoved into extraordinary circumstances.

This is very entertaining fiction. Since the protagonist of this book is younger than the Hidden Faces protagonist—Paige is in her 20’s—I think that readers as young as high school teenagers would enjoy this book. It might be a little intense for some junior high readers. Certainly, suspense readers in their 30’s and up will find this a highly enjoyable read.

You can also check out Brandilyn’s blog, Forensics and Faith, and the Scenes and Beans Kanner Lake blog. 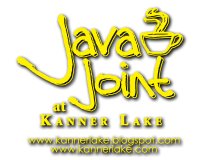