A FAMILY FOREVER by Brenda Coulter 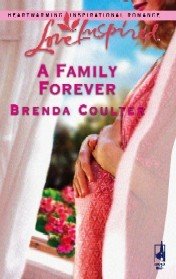 A FAMILY FOREVER by Brenda Coulter

Devastated by the accidental death of her fiancé just three weeks before their wedding, violinist Shelby Franklin has just learned she carries his child. She can't give up the baby, but the only way she can keep it is by accepting a shocking proposal of marriage from a man who doesn't seem to like her very much.

Bike shop owner and semi-pro cyclist Tucker Sharpe owes Shelby more than she will ever understand. Determined to protect her and his brother's child, he presses Shelby to marry him. He insists that if they make an honest effort, God will bless their marriage and teach them to care for each other. But can it really be that simple? Can two people will themselves to fall in love?

Excerpt from A FAMILY FOREVER

I liked Brenda’s debut novel FINDING HOPE (which won a billion awards or something like that, but you know, she’s modest about those) so I was eagerly anticipating this, her sophomore release. She also has a hecka funny blog (“No Rules. Just Write.” Isn’t that a terrific title?) where she expounds on whatever strikes her fancy.

Before I read the book, several people mentioned they didn’t care much for the heroine but absolutely adored the hero. They said it sounded more like the hero’s story than the heroine’s. So I admit I had some preconceived notions before I cracked the spine.

I disagree with all those people (I must be a rebel at heart). I loved the heroine Shelby. She’s very real. She’s prickly and hormonal and irrational and emotional. Just like me! How can I not like someone just like me? Yeah, she did a few rather stupid things, and there are places she went where I don’t know that I’d go, but I was totally feeling her personality and her character.

I think in that sense, Shelby stands out as a unique inspirational romance heroine. She’s a character that not everyone will love. But I think that the readers who relate to her will really connect to her.

Tucker...yeah, he’s dreamy. He’s also a bit too perfect at times. Like when he gives an expensive bike helmet to the kid who stole a bike from his shop. Cute, but...I was waiting for Tucker to whoop the kid’s butt halfway across the state. His actions in the novel are definitely in-character, and he’s very consistent throughout the story, which is nice to see. I just would have liked to see more grit and grime in his personality.

I don’t think this was Tucker’s story. He wasn’t annoyingly perfect, but he was a little too with-it for this to be his story. It was definitely Shelby’s emotional and romantic journey.

There are some scenes and some lines that made me tear up. Really. It’s true, I cry pretty easily when I watch movies and read books, but Brenda has some fabulously poignant lines that are worth the cover price right there.

Aside from the crying, I did a lot of laughing while reading this, too. The snark and sarcasm from Brenda’s blog saturates this book, moreso than in FINDING HOPE. The humor kept the story snappy, refreshing, and fast-moving.

As for audience, I don’t think a younger crowd would necessarily get into some of the particular types of child-rearing and marriage issues in this story. In my opinion, it seems targeted more for the late 20’s and 30-something crowd. I’m sure a teen or college-aged student would enjoy it, but I think an older reader would more appreciate the conflicts, the emotional swings, the plot twists. A younger reader would definitely appreciate the snark.

Get this book before it goes out of print! Love Inspireds don’t have as long a shelf life as other books, so get this while you can. The is easily one of the best inspirational romances I’ve read in a long time.