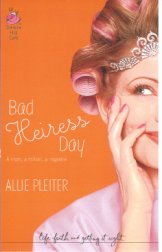 What would you do with $1 million?

That's a question Darcy Nightengale never thought she'd need to answer. But a sudden inheritance of just over $1 million begs a more immediate response. And when Darcy learns of her father's last request that she "give it all away," she discovers just how quickly big money makes big problems.

Her husband believes that charity begins at home. His home. And her children are sure it's only a matter of time before the presents start rolling in. Right? Darcy wants to do the right thing--as soon as she can figure out what it is. Can the path of righteousness be paved with gold? Darcy's surprising answer turns her world on end.

This was a well-written novel, and I think the powerful theme of this story would appeal to a majority of readers quite well. I don't have children and I haven't yet lost a parent, so I personally didn't quite relate as well to the heroine.

The novel starts with the death of the heroine’s father. Readers who have lost a parent will deeply relate to her feelings and actions as the book opens.

I like how the author touches on some of the very human—but not often discussed—aspects of grief, like the anger and bitterness.

The main theme is how hard it is for caregivers—physically, emotionally, spiritually. There’s a great line that sums it up: If you pour everything into it, there’s nothing left over.

The novel will speak deeply to those from all walks of life who serve as caregivers to parents and children, whether at home or in hospice.

The problems that come between Darcy and her husband are real and deep. No fluffy, frivolous conflicts. As a reader, I felt Darcy’s pain and Jack’s worry.

My biggest problem is that this is not a chick-lit, or a mom-lit—not really hip-lit at all. I feel a little cheated. This is a wonderful women’s fiction novel with a terrific premise, but I feel the packaging is wrong. It looks like mom-lit, but I think it’s more of a lighter-hearted women’s fiction novel.

At times, the pace is a bit slow, but since I was expecting this to be a chick-lit, I think the slow pacing is based on my expectations and not the novel’s layout. It might not be as slow-moving as some other women’s fiction novels I’ve read—it seems to be in-between those and a faster-paced chick-lit.

Darcy has a very typical best-friends relationship with Kate, but the novel goes deeper into that to show how Kate supported her through the long illness of Darcy’s father. It touches on the roles of the friends and family around a caregiver both during the illness and after her patient’s death.

Darcy’s slow journey to faith is wonderfully real and not cheesy or hokey at all. It’s done with a skilled, light hand, without any preachiness or Christianese. It was a joy to watch her gradually come to rely more and more on God.

There’s a light, happily-ever-after ending in the tradition of inspirational romance. However, this book is Darcy’s journey rather than a love story.

I’m not quite certain if teens or younger women would relate as well to Darcy’s character, because she’s a little older with children of her own. However, most mothers and older women will definitely root for Darcy in the trials and tribulations of her stage of life.