There are lots of other clean/sweet or Christian romance books on sale from other authors, too, so be sure to check it out.

She met him again by shooting him.

After four seasons and unmarried because she is taller than most of her dance partners, Miss Phoebe Sauber receives the shocking news that she is being callously banished from her father’s estate because he is remarrying. Feeling betrayed by her father and by God, and wanting to escape her family’s presence, she attends an archery tournament with her friends.

But her perfect aim fails her, and her arrow hits a piece of paper held by Mr. Michael Coulton-Jones, whom she hasn’t seen much in society in several years. But strangely, her arrow tears a section of the paper with a partial symbol that looks eerily familiar to her.

He met her again while searching for a killer.

Michael had quit his work as a spy for the Foreign Office when his brother was poisoned. His search for the murderer leads him to Apothecary Jack, a criminal underworld leader with a penchant for poisons, who is gathering a powerful army through an alchemical potion that can give men supernatural strength.

But his path unexpectedly crosses again with Miss Sauber, who saves him from a trap laid by Jack. She and her Aunt Laura, Lady Wynwood, have found a vital connection to Apothecary Jack and the mysterious group he works for.

Now Michael, who had vowed to never again allow civilians to come to harm, must work with a nobleman keeping dangerous secrets, a human lie detector, a chemist, a fellow former spy, and the one woman he’s never allowed himself to get close to.

And it is only this ragtag group that stands against a traitorous organization that could enable Napoleon to conquer the world.

PLEASE NOTE: This is the first book in the Lady Wynwood’s Spies series, an epic serial novel. Each volume has a completed story arc, but this is NOT a stand-alone novel and ends on a cliffhanger. 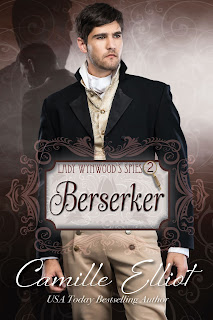 Mr. Solomon Drydale and his team are reeling. After only a single act of mayhem by underworld lord Apothecary Jack, one of their group is down and another is missing.

Desperate, Sol acts on his forbidden knowledge of an agent for the Crown who is known only to the highest levels of government—le petit prince, master of disguises. He defies his superiors and asks the Prince for help.

Now, the team must learn to work with a new member to save one of their own. But time is running out before Jack finds him and breaks him—and puts all of their lives at risk.

PLEASE NOTE: This is the second book in the Lady Wynwood’s Spies series, an epic serial novel. Each volume has a completed story arc, but this is NOT a stand-alone novel and the story continues in volume 3.