May 25, 2022
One of my favorite online tea stores, Adagio teas, has launched an online spices store called Selefina spices. They sent me some spice samples to try, but the ones I had the most experience with are chocolate powder and cinnamon, so I decided to make chocolate hazelnut rooibos tea with the Selefina spices.

Normally, I use a cacao powder I got from Amazon, but the Selefina cocoa powder was a little lighter in color (sorry I forgot to take a picture).

I made my tea the way I normally do with my Amazon cacao powder and some ground cinnamon we got from the local grocery store. Here’s my recipe: 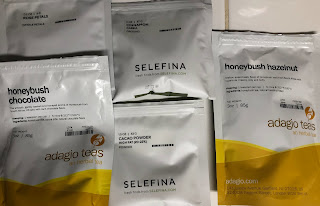 I put the honeybush teas in a fine mesh strainer but I put the cacao powder and cinnamon directly in the pot. I add 2 cups boiling water to the cacao/cinnamon and whisk it a little with a whisk to melt the cacao a bit in the hot water, then I add the mesh strainer with the teas. I steep for 10 minutes and remove the teas.

When I drink it, I add some milk into my teacup and then pour the tea, although I swirl the teapot so that the cacao powder doesn’t settle on the bottom. I add sugar/sweeter to taste. 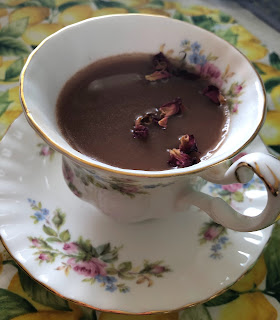 I wasn’t sure I’d be able to actually tell the difference with the spices, since I don’t have the most refined palate, but I actually did notice that the Selefina cacao powder was a LOT richer than the stuff I’d been buying from Amazon. It was super tasty.

The Selefina cinnamon was also a lot stronger tasting than the generic cinnamon I’d been using before. It was quite delicious. However, it was also a bit more acidic? I think? because my tea made my almond milk curdle a little bit, which it hadn’t done before. I’ve never tried this with dairy milk since I’m trying to avoid lactose because of my IBS.

As you can see in the picture, I also tried adding some Selefina Rose Petals that I also got from the sample box, because I heard that chocolate and rose petals are really tasty. The rose petals themselves were much stronger tasting/smelling than other dried rose petals I’ve come across, which is great quality. However, ultimately I wasn’t thrilled with the chocolate/rose combination and ended up taking them out. There wasn’t anything wrong with the rose petals, I just think I’d prefer them in some other recipe.

Selefina also has a few recipes on their website, and I tried out their Golden Tumeric Milk recipe since I’ve never had turmeric this way before. However, I ended up not liking the recipe, simply because I discovered I’m not a fan of turmeric when it’s not mixed with other spices.

However, I saw Selefina’s Focaccia with Fleur de Sel recipe and I think I will try that with sourdough bread and the Selefina salt I received. I’ll post another time on how that turned out!

PS: If you're interested, here's a $5 off coupon code for Adagio.com for first time customers: 4866804223. If it doesn't work, comment below and I'll send you another coupon code.