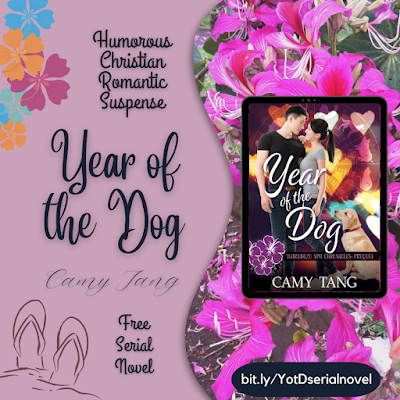 About Year of the Dog:

A month or two ago, I remembered an old manuscript I had completed but which hadn’t sold. It was a contemporary romance meant for Zondervan, titled Year of the Dog.

The book had gone into the pipeline and I even got another title (Bad Dog) and a cover for it, but eventually my editor at the time decided she didn’t want to publish it, for various reasons. She instead requested a romantic suspense, and so I cannibalized some of the characters from Year of the Dog and thrust them into the next book I wrote, which was Protection for Hire. Honestly, I didn’t take a lot from Year of the Dog to put in Protection for Hire, aside from character names and a few relationship ties.

I was originally thinking I’d post Year of the Dog as-is on my blog as a free read, but then it occurred to me that I could revamp it into a romantic suspense and change the setting to Hawaii. It would work out perfectly as (yet another) prequel to the Warubozu series and introduce some of the backstory and conflict of the series ahead of time.

The problem is that I’m still working hard on my Christian Regency Romantic Suspense series, Lady Wynwood’s Spies, and I’m not even halfway through the series yet. I thought I must be crazy to consider doing all the work required to completely rewrite a manuscript when I’m already busy.

But for the past 3 months, I’ve been doing a productivity experiment (on my Writing Diary Blog) in which I write prose in my manuscript every day. I have to do a bare minimum of 100 words.

I’ve found that those 100 words are completely doable, even when I’m feeling really sick. While it was hard for the first couple weeks, doing the streak forced me to learn how to manage my time so that I can work around my IBS flare-ups. As a result, I just hit 180 days on my writing streak and I’m still going strong. What really helped was that my bare minimum for each day is so small and easy to do, although most days I write more than that.

Since I’ve experienced how easy it is to write 100 words a day, it occurred to me that I would have no problem writing 100 words a day on Year of the Dog. I can post the book on my blog as I write it, about one chapter a month.

I’ll also put the links to each month’s chapters in my monthly newsletter. That way I’ll have at least something to read for the contemporary romance readers subscribed to my newsletter while I’m working on the Regency series.

So I spent several weeks outlining my revamped Year of the Dog manuscript, and once the outline was done, I started writing the book.

The rough-ish draft will be posted here on this blog as I write each chapter. I’ll try to update the links below with each new part as it posts, but you can also click on the Year of the Dog tag (haha see what I did?) to see the latest chapter.

It’s an ambitious project, but I’m pretty excited about it. I think I like posting free reads on my blog. What does that say about me??? Probably that I’m not very good at business. 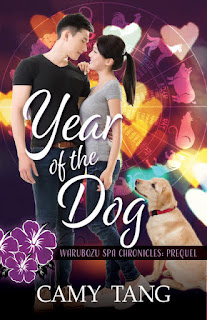 Year of the Dog serial novel
by Camy Tang

Marisol Mutou, a professional dog trainer, is having a bad year.

While renovating her new dog kenneling and training facility, she needs to move in with her disapproving family, who have always made her feel inadequate—according to them, a job requiring her to be covered in dog hair and slobber is an embarrassment to the family. She convinces her ex-boyfriend to take her dog for a few months … but discovers that his brother is the irate security expert whose car she accidentally rear-ended a few weeks earlier.

Ashwin Keitou has enough problems. His aunt has just shown up on his doorstep, expecting to move in with him, and he can’t say no because he owes her everything—after his mother walked out on them, Aunt Nell took in Ashwin and his brother and raised them in a loving Christian home. What’s more, his brother Dusty also needs a place to stay after being kicked out of his apartment—with a dog in tow. And guess who the dog’s owner is?

But then Ashwin gets a request from an old friend, Edytha Guerrero, a private investigator who also runs a day spa on O’ahu’s north shore. A strange bit of “vandalism” at Marisol's facility had led her to find a purse belonging to Edytha’s sister—who had disappeared three years ago. Worried that Marisol might be in danger, and finding out that security expert Ashwin already knows her, Edytha asks him to covertly keep an eye on the busy young woman

Ashwin is reluctantly attracted to the lively, easy-going dog trainer. She reminds him too much of his happy-go-lucky mother, whose betrayal had caused him to keep people at a distance. Marisol sees past Ashwin’s cold exterior to a man who is loyal to his family, unlike her own mother and sister, who only criticize her career choice.

In the midst of Marisol’s disjointed family and Ashwin’s disruptive home, danger begins to circle around them from people who want the past to remain there. Can they shed light on the secrets moving in the shadows?