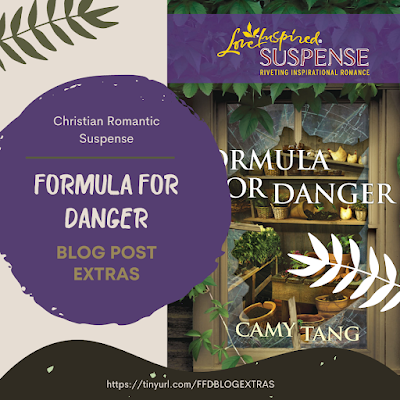 The following was a cute interview of my heroine, Rachel Grant, from my Christian Romantic Suspense, Formula for Danger. The original guest blog post was on another website that was taken down, so I’m reposting it here. It gives a little more insight into Rachel’s character and the spiritual themes of Formula for Danger, which is book 2 in my Sonoma series.

Wow, you've just had quite an adventure.

1. Tell us a little about yourself and how you came to be in the midst of such suspense.

I was working on a new scar-reduction cream product to launch at my family's successful day spa, Joy Luck Life Spa, in Sonoma, California.
But someone was trying to steal my formula--and take me out in the process.

2. So, during the book you met Edward Villa. Tell us a bit about him. What was your first impression? When did you know it was love?

I met Edward several months ago when I hired him to grow the exotic Malaysian basil that's the secret ingredient in my scar reduction cream. As soon as we met, we connected—he gets my jokes, and he made me feel comfortable enough to open up to him and be who I am. But then a couple months before the problems started, he suddenly backed away. I felt really hurt because I had shown him who I really was, and it seemed like he just wasn't attracted to that girl. But while he was protecting me from the people trying to steal my formula and kill me, I discovered that he really does care about me, but he had his own issues with God that had to be resolved first.

3. What strengths/skills do you have? What is your greatest weakness?

I'm very analytical and determined when it comes to my research, but that can be my weakness too. I have a tendency to spend too much time on my research because I want to please my father. I had to learn that God's love for me is more important that my father's approval.

I was afraid of losing my father's love for me, which I thought would happen if I failed to launch this scar-reduction cream product on time.

5. If you could change one thing about yourself, what would it be?

I'd really like to be as tactful as my sister Naomi, or as outgoing as my sister Monica. I'm rather shy and a bit socially awkward at times.

6. Where are you in your faith at the start of your story?

I was a Christian, but I hadn't really understood what it meant to have God's love.

7. Where are you in your faith at the end of the story?

I'm on my way to knowing the difference between God's unconditional love and the world's conditional approval.

8. You've got a scripture at the beginning of the story. Tell us why this scripture is significant.

The scripture is Psalm 24:1 (NIV) "The earth is the LORD’s, and everything in it, the world, and all who live in it." I had no concept before everything happened about how God really has control over everything and really does care for me.

9. If you could be a dessert what would you be and why?

Thanks for having me here!
Rachel Grant 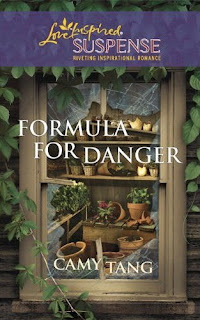 Formula for Danger by Camy Tang

HER LIFE WAS ON THE LINE

Someone wants dermatologist Rachel Grant's latest research, and they'll do anything to get it. Including trashing the plants needed for her breakthrough scar-reducing cream--and trying to run Rachel down. Desperate for help, she turns to Edward Villa, the only man she trusts. But the greenhouse owner knows too much about Rachel's research, and now he's a target, too. Break-ins, muggings, murder...the would-be thief is getting desperate—and getting closer. Edward vows to protect Rachel at all costs. Yet with time ticking away, Edward knows they have to uncover the madman shadowing Rachel before their chance for a future is destroyed.