Ascendance of a Bookworm by Miya Kazuki 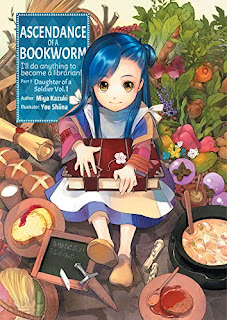 There are several light novel series where I’m always anxiously awaiting the next volume to come out, and one of them is this series, Ascendance of a Bookworm by Miya Kazuki.

As of right now, this is my #1 favorite series across all genres that I read, and since I read so much, I think that’s saying a lot. This is a fantasy isekai story, where the consciousness of a modern Japanese woman is transferred to a girl in a fantasy world with monsters and magic.

Here’s the back cover description of book 1:

A certain college girl who's loved books ever since she was a little girl dies in an accident and is reborn in another world she knows nothing about. She is now Myne, the sickly five-year-old daughter of a poor soldier. To make things worse, the world she's been reborn in has a very low literacy rate and books mostly don't exist. She'd have to pay an enormous amount of money to buy one. Myne resolves herself: If there aren't any books, she'll just have to make them! Her goal is to become a librarian. This story begins with her quest to make books so she can live surrounded by them! Dive into this biblio-fantasy written for book lovers and bookworms!

Camy: I have to admit that I didn’t really get into the series with book 1. There was something about Myne that seemed a bit too whiney and selfish, especially when her new family was obviously worried about her and cared about her. She was very sick and thrust in a shocking situation, but I think she could have been a little more considerate of the people taking care of her.

However as she got used to the new world, I liked her determination to have books to read. I think I like these types of “crafting” fantasy stories (another one is Death March to the Parallel World Rhapsody), but aside from the scenes where she’s trying to make paper, I liked how Myne worked to create new relationships with people in her world in order to accomplish her goals.

From volume 2 or 3, I was absolutely hooked on this series. There’s a lot of conflict that occurs because Myne is from another world and her knowledge and imagination give her an edge over everyone else, but she was born with a body weakened by her magic and in such poverty that she starts out from a severe disadvantage. It’s really interesting to see how she overcomes her trials, and there are also some really poignant moments because of the love she develops for her new family.

The books do have some action, but this is not a monster-slaying type of series. The conflict in the story keeps things interesting.

There’s also a fair amount of humor, especially because Myne has a modern mentality that is at odds with that of the nobility whom she comes into contact with. I think this is why I love light novels so much, because many of them are isekai stories with a modern protagonist in a fantasy world, and the contrast usually results in humorous situations. The humor of Ascendance of a Bookworm is similar to The Saint’s Magic Power is Omnipotent, although without the romance of the Saint series.

The translation is very good, but even aside from that, the writing for this series is quite well done. There are some light novel series that have a great series premise but rather poor execution. The clunky prose is not the fault of the translator in those cases, it’s simply that the writer’s skills are lacking.

But the author of Ascendance of a Bookworm has quite an engaging writing style that really hooked me. I love books where there’s something about the writing and characters that sucks me in. This book has both great writing and complex, intriguing characterization (although to be honest, the characterization did not really start to shine until book 3 or 4 when she starts meeting members of the nobility, and the characterization becomes even more complex in later arcs of the series).

The best part is that this book is published by J-Novel Club, which has the fastest translation and publishing schedule of any other light novel publishing company. A new volume of this series is published every 2-3 months, so there’s no waiting 9 months or a year for a new volume.

(For those of you who care, there was only mild and infrequent swearing up until part 4 volume 3, when there was a lone surprising F-bomb. Those kinds of things are usually the discretion of the translator since Japanese doesn’t have the same swear words.)

If you give this series a try, definitely try at least books 1 and 2 before deciding if you want to continue or not. Book 1 isn’t terrible or anything, but it wasn’t until book 2 that I got hooked by the series, and now it’s become one of my absolute favorite series.