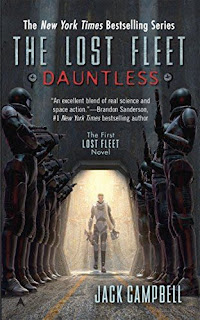 I’m going to say it: this is one of my absolute favorite series of all time. It ranks up there with Dragonsong and Dragonsinger, when I thought there couldn’t ever be a book I liked as well as those two.

I’m not sure exactly why I love this series so much, but maybe because I like the hero (Geary) and heroine (Desjani) quite a bit. The story conflict is also compelling and makes me root for him all the more, and there are moments of humor to lighten the mood.

Here’s the back cover blurb for The Lost Fleet: Dauntless, book 1 in the series:

The Alliance has been fighting the Syndics for a century, and losing badly. Now its fleet is crippled and stranded in enemy territory. Their only hope is a man who has emerged from a century-long hibernation to find he has been heroically idealized beyond belief.

Captain John "Black Jack" Geary's legendary exploits are known to every schoolchild. Revered for his heroic "last stand" in the early days of the war, he was presumed dead. But a century later, Geary miraculously returns from survival hibernation and reluctantly takes command of the Alliance fleet as it faces annihilation by the Syndics.

Appalled by the hero-worship around him, Geary is nevertheless a man who will do his duty. And he knows that bringing the stolen Syndic hypernet key safely home is the Alliance's one chance to win the war. But to do that, Geary will have to live up to the impossibly heroic "Black Jack" legend.

I think I tend to like when heroes are immediately thrown into a fire pit of conflict, against impossible odds, and they manage to turn things around by their wits and their strengths. Jack Geary is a hero like that. He’s not perfect and he’s actually quite humble most of the time, but he always does his best and strives to do the right thing no matter what.

Desjani is a little starry-eyed in this first book, but her character develops in later books and becomes one of my favorite heroines of all time. For some reason she reminds me of the character Jo Lupo from the TV series Eureka, and I always imagine it’s Jo when I read (or listen to) her dialogue in the book.

I actually really enjoyed the audiobook for this series. Christian Rummel is absolutely wonderful with all the voices he has to do.

This series is also very clean, very little (if any) swearing. There’s a little premarital sex, but it’s nothing graphic.

There are two side series, the Lost Stars series and Genesis Fleet series. I didn’t actually care much for Lost Stars—I didn’t find the characters to be very sympathetic, or maybe they just weren’t to my taste.

I simply can’t rave enough about this series. If you enjoy space opera like Star Wars or Star Trek, you might enjoy this one as much as I did.