October 19, 2021
I have to confess, I’m a HUGE sucker for fantasy romance light novels. They’re fantasy novels that tend to not take themselves seriously (as opposed to more serious fantasy like Brandon Sanderson or Game of Thrones), and the romance is light, fluffy, and frothy (if it were possible for romance to be all three at once).

One such fantasy romance light novel series (which has been translated into English) is The Emperor’s Lady-in-Waiting Is Wanted as a Bride: Volume 1 by Kanata Satsuki. There’s only 2 books in the series so far, but I really enjoyed them a lot.

Here’s the back cover description for book 1 in the series: 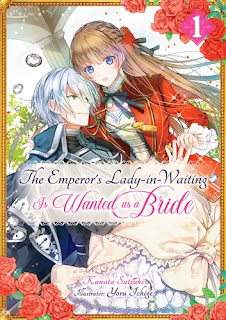 Qatora was once a valiant knight of the Razanate Empire who gave her life to protect a young imperial noble. The tragedy cast her into the primordial Light of Origin, which not only revealed to her a dangerous secret... but also reincarnated her! She now lives as Lyse Winslette, the humble daughter of a poor baron in a neighboring country, who is doing everything in her power to keep her distance from the empire because of the forbidden knowledge she possesses.

Lyse thus works her days away at the royal palace of Olwen as a lady-in-waiting. And she’s rightfully mortified when she’s chosen to attend the visiting Razanate emperor. Little does she know that she’s about to learn another state secret that’s going to land her... an engagement to an imperial knight?! She’ll have to use all her skills—from this life and her last—to get out of this mess. Yet what is this strange feeling when she touches her fiancé’s hand? Just who is Sidis, and what secrets is HE keeping?

I loved the heroine in this series—she’s a former female knight, and while the culture of the country into which she is reincarnated frowns upon female knights, she goes against the norm and manages to be physically strong and protective. She has to put up with the disapproval of her family and the bullying of other ladies for her physical nature, but she handles it with aplomb.

The romance is very obvious—no love triangles—and in the first book, the romance was a little bit cheesy at some points, but on a whole very sweet. The romance was less cheesy in book 2.

The plot also moves forward in unexpected (for me) ways that kept me guessing what would happen next.

The humor in this series is a bit slapstick, but also very cute at times. In book 1, the emperor’s little secret is hilarious!

(I also have to tip my hat to her as an author, she’s incredibly prolific. Only 2 of her series have been translated from Japanese to English, so I looked on Bookwalker.jp for her other series and found she has a TON of them! The woman writes so fast and comes up with so many different series ideas!)

I really love how fun this series is so far and can’t wait for the next book. If you enjoy funny, light-hearted romance and fantasy (and don’t mind mild swear words), this might be up your alley.