June 24, 2021
For a couple weeks now, I’ve gotten back into my Japanese language study. I discovered that for me, my Japanese study is like exercise, in that I have to do it first thing in the morning or it’s never going to get done. Even if I tell myself I’ll do it later, that almost never happens. I’m usually too mentally tired at the end of the day to do Japanese study.

So I’ve been doing about an hour of Japanese flashcards studying before I start my writing work every day. A part of me chafes at doing it when I’m raring to go to work, but my Japanese learning is important to me. Eventually I’d like to get proficient enough to be able to translate my writing into Japanese so that I don’t have to pay a translator. I know I’m really far from that right now, but I can dream, right?

I had been thinking of restructuring my Japanese learning for a while now, so today I went to the Bunpro.jp website for the first time in months. Bunpro is basically flashcards for grammar, and it’s a really great website. However, I had forgotten a lot of grammar, which made the Bunpro flashcards difficult and frustrating, and I had a tendency not to do them. So I went ahead and reset my reviews so that I could start again from the bottom. I want to be able to do some grammar flashcards everyday in addition to my kanji and vocabulary, and while Bunpro is great for that, it wasn’t helping if I wasn’t doing them. So by resetting them, I hope it’ll make it easier for me to make myself review my grammar. It’ll be too easy for a couple weeks, but it’ll be a good review of some things I’ve probably forgotten. 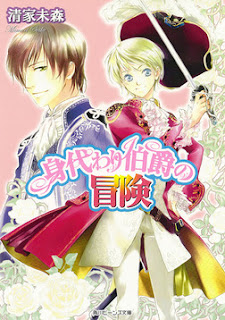 Today, I also happened to read in a forum board that it’s best to both study the grammar and vocabulary, and also to expose yourself to more difficult media and get used to reading and listening to the language. This is something I had read about earlier, too, but I had forgotten about it. So I also started working on a light novel I’ve been wanting to read for a while now, Migawari Hakushaku no Bouken 身代わり伯爵の冒険, which translates into “The Adventure of the Substitute Count”. It’s a pseudo-European historical romantic comedy and it looks really cute, although I’ve only read the scanlated manga version, and the light novel is not translated into English. Even though it’s harder than what I can read right now, I can at least study the kanji, vocabulary, and grammar of the sentences, which will challenge me. I bought the ebook version from Bookwalker.jp, which makes it easy to look up words. I started working from the first page looked up the kanji and the vocabulary words in my Anki flashcards app. In Anki I tagged the cards with a “Migawari” tag and made a special Custom Study deck to specifically study the kanji and vocabulary from the book. This way, I’m still learning my Japanese, but it’s also targeted toward the book I want to read.

I wish I had more time to devote to my Japanese, but with the house chores I need to do every day, I have a limited amount of time left, which I need to devote to writing. I’m actually using some of that time to study Japanese rather than write, and I don’t want to cut too much into my writing time because I want to keep putting my books out quickly. Right now, I’m writing a book every 2-3 months, which really isn’t a bad pace. I think if I can learn to focus better, my writing speed might improve.

So here is my public declaration that I’m getting back into my Japanese language learning! I hope I can improve by next year!