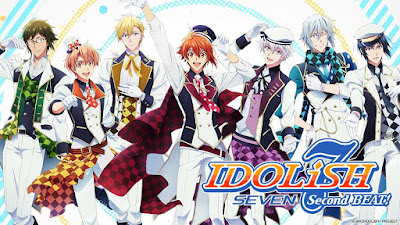 I feel slightly embarrassed to admit I watched this anime and absolutely loved it. I didn’t think I’d like an idol genre anime so much! The series is based off of a Japanese mobile game with a storyline and rhythm games, and the art for the series is beautiful. The dancing sequences were also really compelling. The characters also have rather intriguing backstories, making them more 3-dimensional and complex.

A group of aspiring idols gather at Takanashi Productions and are entrusted with the company's future. The seven men who have just met represent a variety of totally different personalities. However, they each have their own charm and possess unknown potential as idols. Forming a group, they take their first step together as "IDOLiSH7." Their brilliantly shining dancing forms onstage eventually begin captivating the hearts of the people. In the glorious but sometimes harsh world of idols, they aim for the top with dreams in their hearts!

It was surprising to find some of the voice actors I’m familiar with are rather good singers—Kensho Ono (Kuroko from Kuroko’s Basketball), KENN (Akihito from Beyond the Boundary,one of my favorite anime series), Atsushi Abe (Toma from A Certain Magical Index), Toshiki Masuda and Souma Saitou (Ennoshita and Yamaguchi from Haikyuu!). To be honest, most of the voice actors are decent singers.

And in looking at the original mobile game and the upcoming 3rd season, another voice actor really shocked me with how really good a singer he is, Subaru Kimura (Tendou from Haikyuu!). I bought some songs he sings for the mobile game which are available to buy on iTunes, and I absolutely love his voice!

Anyway, if you have time and are in the mood for something fluffy and sparkly, check out Idolish7. You can watch for free on Crunchyroll.