Book review: A Portrait of Loyalty by Roseanna M. White 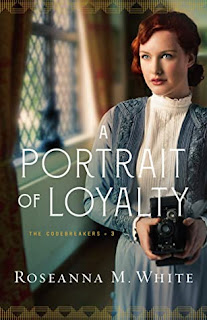 A Portrait of Loyalty (The Codebreakers Book 3)

Zivon Marin was one of Russia's top cryptographers, until the October Revolution tore apart his world. Forced to flee after speaking out against Lenin and separated from his brother along the way, he arrives in England driven by a growing anger and determined to offer his services to the Brits.

Lily Blackwell sees the world best through the lens of a camera--and possesses unsurpassed skill when it comes to retouching and recreating photographs. With her father's connections in propaganda, she's recruited to the intelligence division, even though her mother would disapprove.

After Captain Blackwell invites Zivon to dinner one evening, a friendship blooms between him and Lily. He sees patterns in what she deems chaos; she sees beauty in a world he thought destroyed. But both have secrets they're unwilling to share. When her photographs reveal that someone has been following Zivon, his loyalties are called into question--and his enemies are discovered to be far closer than he'd feared.

Camy here: What a fascinating historical romance! I was initially drawn toward the codebreakers aspect of it, but the hero’s escape from Russia and the history of the revolution made for an exciting backdrop for the plot.

I loved how Lily was portrayed, and how she saw the world with her eye for photography. The photographs she chose to take, the things that captured her attention, spoke volumes as to her personality and character, and made her incredibly likeable. Her secret job creating falsified photographs was also incredibly interesting.

The hero was a little harder for me to like at first, but then the scene where he happens upon Lily and her sister, and yet he immediately looks at her first, was so incredibly romantic! I was also interested in why he was being pursued by the Russians, and I liked how he felt as an outsider among his codebreakers.

The story was a slow start for me, but it really picked up at around the midpoint and I thoroughly devoured the rest. The ending was so sweet, too! I really enjoyed this one.