March 30, 2020
I want to confess that I am a total sucker for emotional manipulation in visual media.

Whenever you’re supposed to cry in a movie, I’m sobbing. I will even cry during certain commercials, especially those touching ones that air around Christmas. And I will always start craving food when I see commercials for them, especially the ones showing pizza, fried chicken, and french fries.

So I shouldn’t be surprised that when I was watching a Chinese romantic comedy TV series on Netflix, I was completely influenced by a certain character who appeared around midseason who loves making Chinese tea Gongfu style. In fact, he was making tea in practically every episode after he was introduced.

I tried Gongfu style tea brewing when I first did my reviews of Adagio/Masters Teas a few months ago. I had done research on it, but apparently there are lots of different articles on Gongfu, which give different amounts of tea, water temps, and steeping times. I don’t know if the method I used then was appropriate for the particular types of teas I was reviewing, which may have been why I didn’t much care for the tea using Gongfu brewing.

So after seeing Gongfu tea in episode after episode, I decided to try it again.

I did more extensive research this time, and ordered samples of oolong teas from Adagio.com, and a few oolongs that I had tried before from Lupicia USA. The Adagio tea arrived in the mail first.

I didn’t have the exact tea ware needed, but I was just trying out the Gongfu brewing method, so I didn’t want to commit to expensive equipment until I’d given this method a shot using different teas.

I only used my electronic hot water pot last time, and from my further research this time, I found out that different water temperatures can really change the character of the tea (although I wasn’t entirely sure I have a sensitive enough sense of taste and smell to tell the differences). Since I already had a Bonavita gooseneck kettle for making pour-over coffee, it was perfect for Gongfu since it takes the guesswork out of water temperatures for me.

I didn’t have a gaiwan tea cup or a Yixing teapot, so I decided to use my smallest Japanese teapot. It’s a little too large, so I only filled it halfway with water.

Another thing I didn’t have was a Gongfu tea tray to capture the poured off water and tea. There are some really nice ones out there, and the setup in the Chinese TV show was pretty nice. But ultimately it’s just a screen over a tray to hold the water, so I thought, Why not just use a baking pan and a cooling rack? 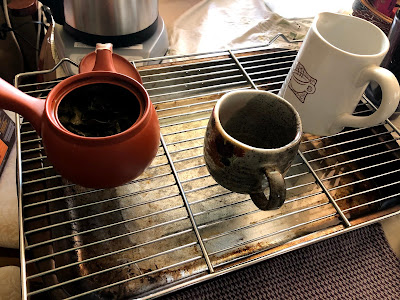 Gongfu connoisseurs are either laughing or screaming.

You can see the bottom edge of my Bonavita at the top left of the photo. The teacup is my Kutani handled cup, which I usually use for my green tea after dinner.

However, I’m only drinking by myself, and since I’m only using about 150mL of water, it all fits into my Kutani cup so I don’t really need the Cha Zhong. However, I pour the tea in there first because it cools the tea down quickly so I can drink it without burning my mouth, since my Kutani is pretty thick-walled and the tea doesn’t lose heat very quickly.

My ghetto setup worked really well, and I experimented with different water temperatures and brewing times. The amount of tea has been about the same across all the articles I’ve read, with only a 1-3 gram difference in tea, plus my kitchen scale is only accurate within 1-2 grams.

I’ve discovered that for the oolongs I’ve tried so far, I prefer about 9 grams of tea (give or take 1-2 grams because of my kitchen scale) in about 150-200mL of water at 90-95 degrees Celsius, with steeping times of 20 seconds for the first steep, and increasing in 10-second intervals. Compared to how I did Gongfu steeping in my earlier reviews, I used much more tea this time since I weighed it instead of using a tablespoon, and I used much hotter water. It really did make a big difference in taste, plus this time I smelled the steeped tea leaves in addition to tasting the tea, and it made for a much more relaxing and “zen” teatime than before.

I have to admit I really am hooked on this tea brewing style now. The entire “ceremony” of making the tea—the several steps taken, the aromas of the tea leaves and the tea, the time taken to taste the difference in each successive steeping—makes the experience very meditative and soothing for me. There have been some oolongs I’m not as fond of, but I’ve only tried three or four so far, and still have a few more to go. Plus my Lupicia tea arrived today and I’m looking forward to trying those, too.

I did order a Yixing teapot from Adagio, the smallest one since it’s only me drinking the tea. I also ordered a real Gongfu tea tray from Amazon, but that’s not arriving until April or May, so my ghetto setup will serve me until then!

I’ll probably do a few followup tea reviews once I figure out my favorites, so if you’re interested in this tea brewing style, stay tuned. Also, if you want to know why the Gongfu method makes such good tasting tea, here’s a good Youtube video about it: