June 12, 2019
Today’s blog post is another review of the teas I received from Masters by Adagio Teas. Today I am reviewing the Shi Feng Long Jing green tea.

See here for my thoughts on Masters Teas and its website in general.

I took pictures of the tea before steeping and after steeping, but because the light is different on different days, I also included some rosemary and chocolate mint sprigs so you can compare the color of the tea. 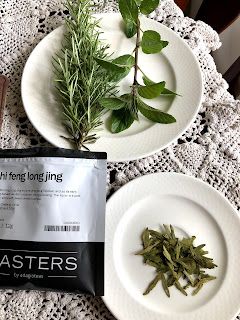 “Our 2019 Shi Feng Long Jing, which translates to Lion's Peak Dragonwell, is one of the most famous green teas in China. It hails from the equally famous and historic West Lake area in Hangshou, Zhejiang province. This Shi Feng Long Jing is a pre-Qing Ming Festival, and so its early spring harvest results in a tender, young plucking. The liquor is a pale yellow, with a soft, sweet chestnut aroma. The crisp body is delicately nutty, quite complex, with a flickering hint of sweet grass and apricot blossoms.

This Shi Feng Lung Jing is grown at an elevation of 500 meters above sea level in Zhejiang, China. This hand plucked variety has a standard of one bud and one or two, three cm long leaves. which were harvested in early April 2019. The firing time and temperature is determined by the tea master and depends solely on the tenderness of the leaves at that time and is repeated one additional time. Compared with other Lung Jings, this one has a flatter, lighter appearance.”

“This tea contains a moderate level of caffeine. Steep at 170° for 2-3 minutes.” 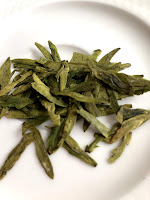 The first time I made the Yu Qian Anji Bai Cha tea, I used a tablespoon and the tea was very light. So this time, I just weighed the tea when making my first pot. I used 3 g of tea in 235 mL (about 1 cup) of 170℉ water for 3 minutes.

The color of the tea was very light, but it had a very deep, strong tea flavor that was very nice without being too grassy. The flavor was definitely on par with some of the expensive sencha teas I’ve tasted. I thought it tasted a little nutty, with just a hint of floral, which I enjoyed with Japanese youkan, a sweet jellied bean paste dessert bar. The aftertaste was bright with only the faintest hint of bitter, which made me also try it paired with some Japanese cookies (Shiroi Koibito and Kitakaro Hamanasu), and I thought that was a good flavor combination also.

I steeped it a second time (170℉ water for 5 minutes), but it turned out too weak for my taste. 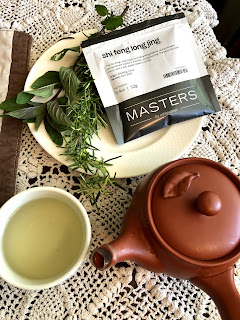 As with the Yu Qian, I was a little disappointed with the fact that if the tea was not completely poured out of the pot at the end of the steeping time, the tea left in the pot oversteeped and started to become bitter if it was left for longer than 5-7 minutes. Other high-grade sencha teas I’ve tasted have not become bitter despite the water being left in the pot, but granted, most of the time I completely pour the tea out of the pot when the steeping time is over.

As I mentioned in my review of the Yu Qian Anji Bai Cha tea, when I usually make sencha, I use 2 teaspoons of tea (which weighs between 2 and 3 g) and 1 cup of water at a temperature of 190℉ for 2 minutes. This green tea recommends water at 170℉, which is cooler than I’m used to. I didn’t mind the cooler temperature of the tea, but some tea drinkers like my mom really dislike the cooler water temperature, regardless of how the tea tastes. So I decided to try to make it at a higher temperature just to see how it tastes in comparison to the lower temperature. I also weighed the tea for the third pot, but I only added a little more than 2 g of tea to 1 cup of 190℉ water, steeped for 3 minutes.

It tasted remarkably like it did at the lower temperature water, although perhaps the floral scent was weaker. It has such a bright yet warm mouth feel that I just really like drinking it while eating sweets.

I resteeped it for 5 minutes in 190℉ water, and unfortunately this did not resteep well at the higher water temperature. It was incredibly weak, more like just plain hot water.

Overall, I wouldn’t be ashamed to serve this tea to my mother even at the higher temperature water. She tends to like stronger tea so I’d probably add 3 - 3.5 g of tea per cup of water, but it’s a really elegant tea that goes well after dinner.