May 29, 2019
Today’s blog post is another review of the teas I received from Masters by Adagio Teas. Today I am reviewing the Ali Shan Special oolong tea.

See here for my thoughts on Masters Teas and its website in general. 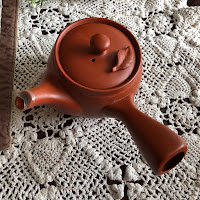 As a disclaimer, I drink a lot of green tea—sencha, genmaicha, and hojicha—and I’m a big fan of various black teas prepared British style with milk and sometimes sugar, but I don’t drink much oolong tea. I prepared the oolongs the way it recommended on the MastersTeas.com website, but since I don’t have a lot of experience with oolong, I used this article on the smithtea.com website as reference for steeping the oolongs Gong Fu style.

I have a small Japanese tea pot which I used for all the teas.

I took pictures of the tea before steeping and after steeping, but because the light is different on different days, I also included some rosemary and chocolate mint sprigs so you can compare the color of the tea. 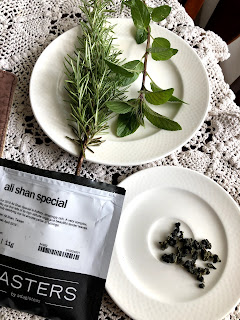 “Our 2019 Ali Shan Special is buttery and amazingly rich. It brews a very complex, silky cup that speaks of its high altitude origin and beautiful tender leaves. A truly satisfying cup for anyone partial to oolongs.” 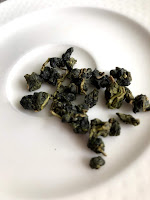 The color is light and the fragrance is a delicate green smell. The flavor is unexpectedly a bit like the high-priced sencha I bought in Japan, with a fresh and verdant taste. This was a good tea to drink when eating sweets, but strangely, I really enjoyed this with chocolate! As soon as I sipped it, I thought, “This would taste good with chocolate,” and when I tried it, I really liked how the tea tasted so silky and yet fresh after I ate the chocolate.

The tea also tasted good when I drank it alongside some Japanese youkan, a sweet jellied bean paste dessert bar. However, I didn’t care for how the tea paired with some Japanese cookies. 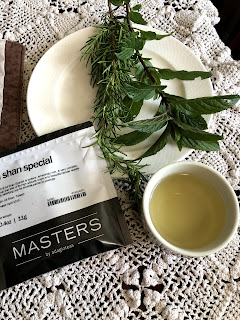 This tea re-steeped incredibly well. The second steeping (212℉ water for 5 minutes) tasted almost exactly like the first, just a tad weaker but not enough to tell that it was a second steeping.

I tried the Gong Fu method of brewing next according to the website (1 teaspoon of tea, 100 mL of 190℉ water). After discarding the rinse, I brewed each steeping one after another and poured them into teacups (and tasted them as they came off). In the picture, it starts from 12 o’clock, which is the 20 second steeping, and going clockwise, each cup is an additional 10 seconds of steeping, ending with a 70 second steeping. The website recommends to keep brewing until the flavor of the tea is too weak, but I stopped at 70 seconds. I could have re-steeped at least another 3 or 4 cups, or possibly more. 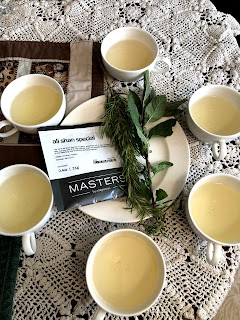 As with the Formosa Bai Hao oolong tea, I didn’t care for the tea using this method. The first two steepings were weak, while later steepings were stronger. However even later steepings were not very flavorful, in my opinion. I think part of the whole process is the experience of drinking cups of weaker to stronger tea and discerning how the tea changes with each steeping, and my taste buds are probably not that refined.

I did not make this into an iced tea because I could tell I would not enjoy it cold.

In making this tea in the future, I’ll just use the normal method (212℉ water for 3 minutes), and I will probably re-steep the pot also, since this tea seems to re-steep quite well. I enjoyed it a lot when drinking it while nibbling at some fine dark chocolate.

February 01, 2023
I’m posting a Humorous Christian Romantic Suspense serial novel here on my blog! Year of the Dog is a (second) prequel to my Warubozu Spa Chronicles series. Year of the Dog serial novel by Camy Tang Marisol Mutou, a professional dog trainer, is having a bad year. While renovating her new dog kenneling and training facility, she needs to move in with her disapproving family, who have always made her feel inadequate—according to them, a job requiring her to be covered in dog hair and slobber is an embarrassment to the family. She convinces her ex-boyfriend to take her dog for a few months … but discovers that his brother is the irate security expert whose car she accidentally rear-ended a few weeks earlier. Ashwin Keitou has enough problems. His aunt has just shown up on his doorstep, expecting to move in with him, and he can’t say no because he owes her everything—after his mother walked out on them, Aunt Nell took in Ashwin and his brother and raised them in a loving Chri
2 comments
Read more