Chihayafuru is available in English! 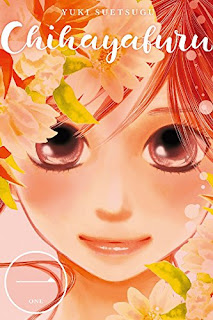 My absolute favorite manga series is now officially licensed in English and available on Kindle and iBooks! I first saw Chihayafuru the anime series (watch it free on Crunchyroll) and fell in love with the storyline and characters.

There was a combo English/Japanese print version of volumes 1 and 2 that came out earlier, but it was rather confusing to read (but I still bought them). This, which was just released, is an English language-only version on ebook.

Chihaya is a girl in the sixth grade, still not old enough to even know the meaning of the word zeal. But one day, she meets Arata, a transfer student from rural Fukui prefecture. Though docile and quiet, he has an unexpected skill: his ability to play competitive karuta, a traditional Japanese card game. Chihaya is struck by his obsession with the game, along with his ability to pick out the right card and swipe it away before any of his opponents. However, Arata is transfixed by her as well, all because of her unbelievable natural talent for the game. Don't miss the first volume in this story of adolescent lives and emotions playing out in the most dramatic of ways.

Camy here: I hadn’t heard of karuta until watching the anime and reading the manga series, but it’s really fascinating. It requires immense mental stamina and memorization skills as well as a physically demanding aspect in terms of quick, accurate reflexes. The series also highlights a key cultural component, the beauty of these extremely old Japanese poems.

If you’re not sure if you’d enjoy this series, watch the anime on Crunchyroll first (it animates the storyline up to about volume 9). I was hooked immediately and have been buying the Japanese-language manga series ever since (it’s still ongoing in Japan), even though I don’t understand Japanese all that well yet. There are illegal translations online, so I’m really glad to finally be able to support the author by buying the official English translation version.