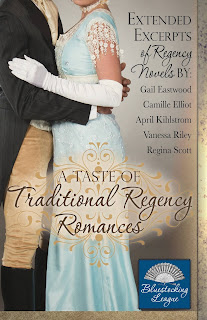 A Taste of Traditional Regency Romances

Get it on Get it on Kindle, iBooks, Nook, Kobo, Smashwords

I and my friends from the Bluestocking League have put out a sampler ebook with extended excerpts from five Regency romances! Each of the books in this sampler is the first book in a series, and all the books are clean, wholesome romances.

From some of the most beloved authors of Regency romance come stories to delight. These excerpts, set in the time of Jane Austen, will give you a sip of sweet romance and will leave you eager for more.

From Gail Eastwood, The Captain's Dilemma: Escaped French war prisoner Alexandre Valmont has risked life and honor in a desperate bid to return home and clear his name. Merissa Pritchard risks charges of treason and her family's safety to help the wounded fugitive. But will they risk their hearts in a most dangerous game of love?

From Camille Elliot, The Spinster’s Christmas: Spinster Miranda Belmoore and naval Captain Gerard Foremont, old childhood friends, meet again for a large Christmas party at Wintrell Hall. Miranda is making plans to escape a life of drudgery as a poor relation in her cousin’s household, while Gerard battles bitterness that his career was cut short by the injury to his knee. However, an enemy has infiltrated the family party, bent on revenge and determined that Twelfth Night will end in someone’s death …

From April Kihlstrom, The Wicked Groom: When the Duke of Berenford is engaged to marry a woman he's never met, what's a poor man to do? How was he to know she wouldn't appreciate his brilliant scheme?

From Vanessa Riley, Unmasked Heart: Shy, nearsighted caregiver, Gaia Telfair never guessed she couldn't claim her father’s love because of a family secret, her illicit birth. Can the mulatto passing for white survive being exposed and shunned by the powerful duke who has taken an interest in her? William St. Landon, the Duke of Cheshire, will do anything to protect his mute daughter from his late wife's scandals. He gains the help of Miss Telfair, who has the ability to help children learn to speak, but with a blackmailer at large, if only he could do a better job at shielding his heart.

From Regina Scott, Secrets and Sensibilities: When art teacher Hannah Alexander accompanies her students on a country house visit, she never dreams of entering into a dalliance with the handsome new owner David Tenant. But one moment in his company and she's in danger of losing her heart, and soon her very life.

Join the Bluestocking League in celebrating the wonder of traditional Regency romance.

Get it on Get it on Kindle, iBooks, Nook, Kobo, Smashwords