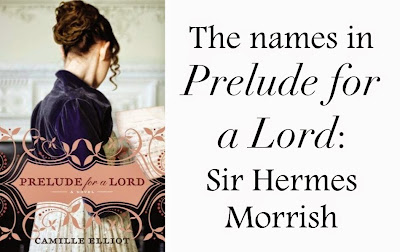 Sir Hermes was one of the easiest characters to name. He’s a bit foolish, and very easy going. The Greek god Hermes is sometimes portrayed as the Fool, with abstract knowledge and child-like innocence.

When I looked up the meaning of the word, “moron,” it mentioned the Latin word morus which means “foolish.” I tweaked “morus” into Morrish for Sir Hermes’ surname.

Sir Hermes is very carefree, with a boundless enthusiasm for life that makes Bayard’s mother feel young and carefree herself. Sir Hermes is a considerable contrast to the personality of her late husband, Bayard’s father, which might be why she remarried to a man like Sir Hermes Morrish.

Sir Hermes is rather self-absorbed. He charmed Bayard’s widowed mother despite the fact he is slightly lower in social status and has less money than Bayard’s family. However, Sir Hermes is a gentleman—he is not a commoner nor is he bankrupt.

He spends freely as the whim takes him, but is not extravagant. The reason is because he only gambles if the game entertains him, and most players are too stodgy and serious, so he doesn’t play as much as he could and he’s not too bad a loser.

I will confess that I modeled Sir Hermes’s nephew, Mr. Robert Morrish, after Robert Ferrars in Emma Thompson’s Sense and Sensibility. He is like a ginger colored horse, with big front teeth and weak chin. He looks a little like his cheerful uncle, Sir Hermes, but with shiftier eyes. He has a rather cruel wit, and he dances very well—better than Lord Dommick, alas.

I did come up with specific names for each of these young men, but I am also planning on writing their stories in future books, so I think I will not yet blog about the meanings behind their names. (I hear your collective cries of dismay!) If you’re on my Camille Elliot newsletter, you’ll be sure to hear when the next book in this series is available!

I hope you enjoyed this blog series! I had fun figuring out what to name each of my characters!