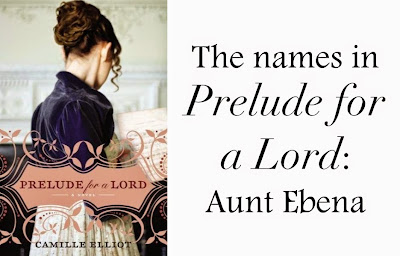 Ebena was originally going to be the nastiest miser I could come up with, but somehow when I started plotting the book, she just became different. So her first name doesn’t quite match how I had originally envisioned her—a miser like Ebenezer Scrooge. Get it? Ebenezer … Ebena …

I mentioned I was really bad at coming up with names, right?

And I did check in British censor records and there were a few women named Ebena in my time period. So it wasn’t completely out of left field.

Aunt Ebena’s father had essentially sold her in marriage to Mr. Garen, a man twenty years her senior. He was a contemporary of Lord Ravenhurst’s father—Mr. Garen and the previous Lord Ravenhurst were only about five years apart in age.

When coming up with Ebena’s husband’s name, I did a Google search for “character” “sold in marriage.” It brought up Daenerys Targaryen from Game of Thrones—sold in marriage by her brother. It was by far the most popular result, listed several times.

So… I named Ebena’s husband Mr. Tar Garen, a gentleman modestly wealthy through his factory investments.

Mr. Tar Garen’s niece, Margaret, showed up in the book a bit unexpectedly. She was suddenly there in the first chapter and I had to replot the entire book before I could continue writing. I named her Margaret because she reminded me of the sword-wielding Margaret from Emma Thompson’s movie, Sense and Sensibility. (“Piracy is our only option.” !!! :)

Next, the closest thing to a mother that Alethea ever had, Lady Arkright.