SUSHI FOR ONE: deleted scene chapter 24 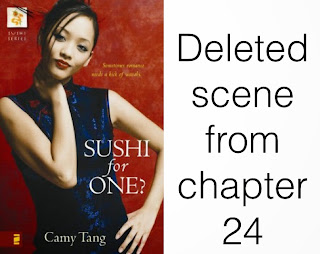 I found another deleted scene from Sushi for One tucked away in the depths of my computer. This one was a short scene originally inserted at the beginning of Chapter 24, but it got axed since I was over word limit, and my editor pointed out it didn’t do much for the storyline.

I’m also giving away the last of my author copies of Sushi for One over at Goodreads! Click here to enter (you must belong to Goodreads to enter). Ends September 20th.


They got her into the apartment, and Venus went to collect the Igloo ice machine and the CPM machine. She set the CPM on the bed.

“When you lie down, I have to move the machine here to fit under your leg.”

“Well, the edge of the machine is hanging over the end of the bed.”

“But I’ll bang my head against the wall.”

“Would you rather have the machine drop to the floor? With your leg attached?”

Venus started lugging boxes to the foot of Lex’s bed. “Alan said the CPM machine needs a footboard or something to hit against, because the passive motion will move it backwards.” She had to squeeze past the box once it was in place.

“How am I going to get to the bathroom?”

“I hope I don’t have to go badly. It’ll take so long to get past the boxes—”

“Your fault for getting such a cramped studio.” Venus glared at her.

She headed to Lex’s freezer. “No way.”

“You don’t have an ice maker?”

Venus looked around, saw Lex’s ice chest. “I’ll go get ice from Safeway. We’ll store it in that.” She picked up her purse and left.

Lex stared at the stains on the ceiling. This day was getting worse and worse.

Venus’s rattling of the door knob woke her from her doze.

Venus stopped. “Are you actually being polite today? What a shocker.”

Venus chortled and dumped the ice into the ice machine. She hooked Lex up, and a spurt of cold crept over the surface of her knee. It numbed the throbbing pain.

“Do you see a lot of electrical appliances?”

Venus gusted out a frustrated sigh. She bent to pick up her purse. “I’ll be back.” Her snarl rumbled in the room after she slammed the door shut.