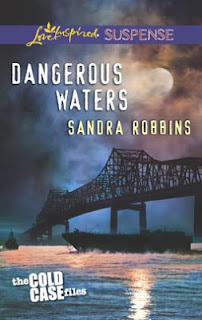 The winner of
Dangerous Waters
by Sandra Robbins
Is
Amy C.

I know the rest of you are crying into your tomato basil mozzarella salad that you didn’t win. Cheer up! Order the book!


SOME SECRETS ARE MEANT TO STAY BURIED
Laura Webber is determined to uncover the truth behind her parents' murders. But after being interviewed about the unsolved case, she's abducted and dumped in the Mississippi River with a warning to stop digging up the past. With her life in jeopardy, she knows that her former fiancé, Brad Austin, is the only person she can turn to for help. The cold-case detective has spent years trying to forget Laura, yet he can't turn her away. But before Brad can wrap her in his protection, will their reunion be cut short by a killer threatening to silence Laura forever?
The Cold Case Files: Uncovering secrets of the past
Excerpt of chapter one: