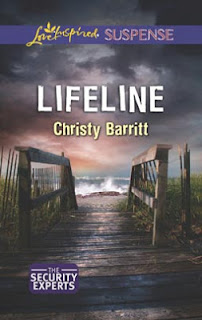 The winner of
Lifeline
by
Christy Barritt
Is
Kathy E.
Congratulations! (I've emailed you. Please email me at camy {at] camytang[dot}com if you didn’t get the email message.)

I know the rest of you are crying in your French onion soup that you didn’t win. Cheer up! Order the book!

"I did it for you."
The chilling words in the text message have Julianne Grace fearing for her life. She's sure that her abusive ex-fiancé has killed two people—and that she's the next target. But will anyone believe that her presumed dead ex is really alive? The only man who can help Julianne is cool, aloof security specialist Bradley Stone. Not only does she need his protection, but he's also the link to finding answers about her ex-fiancé's death. And the closer Bradley and Julianne get to the truth—and to each other—the angrier the madman after Julianne becomes. One wrong move and they could both fall prey to the killer's deadly scheme.

This week, the featured book is: In This Town by Beth Andrews (Harlequin SuperRomance)