Elizabeth Goddard is an award-winning author with well over a dozen romance and romantic suspense novels, including the romantic mystery, The Camera Never Lies—winner of the prestigious Carol Award in 2011. After acquiring her computer science degree, she worked at a software firm before eventually retiring to raise her four children and become a professional writer. A member of several writing organizations, she judges numerous contests and mentors new writers. In addition to writing, she home schools her children and serves with her husband as he pastors a church in Louisiana.
http://elizabethgoddard.com

And now, here’s me and Elizabeth!

1) What inspired the storyline of RIPTIDE?

Riptide is the second book in a series about high-stakes repo men. I read an article about a man labeled the Learjet repo man, and he often goes into high-risk situations to retrieve big ticket items from people like drug lords and other unscrupulous individuals. My understanding is he is wanted dead or alive in one third world country where he took the president’s jumbo jet. :) But I thought it would be exciting to write a series about that. In Treacherous Skies, they were after a Learjet belonging to a drug lord. In Riptide, my hero is retrieving a small yacht when trouble ensues.

2) If your heroine were a pie, what would she be?

Great question—I’ve never heard this one before! Hmmm. I’d have to say huckleberry pie and that because my hero talks about how his grandmother used to make them and how much he loves them.

3) Does your hero have a pet? If he doesn't, what would it be like?

Though my hero’s pet isn’t mentioned in the story he has an African grey parrot. He can travel and leave the bird for a few days at a time if he needs to. And then when he walks into his empty apartment, Charlie says hello and fills his home with all sorts of chatter, considering that Charlie’s vocabulary includes a thousand words.

4) What was your favorite/funnest scene in writing RIPTIDE?

Riptide is pretty intense and when I read this question, a scene came to mind, but I wouldn’t say it is a “fun” scene, but an emotionally intense scene, if that’s okay. My hero is hanging from cliff, and holding onto a man to keep him from falling—holding onto a man who moments before tried to kill him. I don’t want to give too much away, but so much of the story comes together through this scene and really clicks. My editor commented on the scene as well, how emotionally powerful it was.

Camy: Thanks so much for being here today, Elizabeth!

Elizabeth is also doing a giveaway for a copy of RIPTIDE! 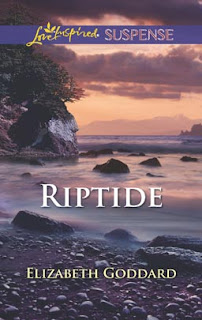 Treasure HuntTwo surprises await high-stakes repo man Jake Jacobson on his latest job. First, old flame Kelsey Chambers. Second, gunfire! Seizing the luxury yacht should have been easy, but he hadn't planned on Kelsey's appearance. Or that smugglers would hijack the vessel to find an antique map hidden on board. The map is Jake and Kelsey's only leverage…but it carries a price. Without it, they're as good as dead. With it, they're the target of a relentless hunt. Their failed relationship has Kelsey afraid to rely on Jake again. Can she count on him with their lives on the line?

You must join my email newsletter to be eligible for this contest. Fill out the form below. Be sure to read the rules.

Extra Twitter entries: Get one extra entry per day if you tweet about this giveaway:
Christian romantic suspense giveaway @camytang! Elizabeth Goddard’s RIPTIDE http://is.gd/RtE6Pf
(Be sure to include @camytang so I can see your tweet and give you your extra entry.)