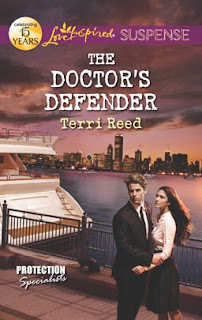 The Doctor’s Defender
By Terri Reed

As a trauma surgeon, Dr. Brenda Storm saves lives every day. But someone wants her dead. It starts with the anonymous delivery of poisoned cupcakes. Now the hospital has hired a bodyguard to protect her 24/7. At first, Brenda doesn't think too-handsome Kyle Martin is right for the job. Then she discovers his harrowing background—and that Kyle will do anything to keep her safe. With every attempt on her life, she's more drawn to the strong and silent man who risks his life for hers. But their growing feelings could put them both in harm's way.

This week, the featured book is: Rodeo Ashes by Shannon Taylor Vannatter (This is a Heartsong Presents Inspirational/Christian romance!)