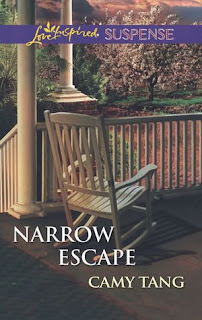 Most of you guys already know how much I suck at coming up with names, right? So when I needed to come up with names for Narrow Escape, I ran a contest with the prize of naming my characters in my then-untitled Love Inspired Suspense manuscript.

Huge thanks to my winners who named my characters:

Jennifer F. was the grand prize winner, and she named Arissa and various characters, including Arissa’s discipler at church! I didn’t need a true Filipino name for her first name, but Jennifer actually did some internet research and came up with some Filipino names!

I would have allowed one of my winners to pick the hero’s name, but he had already been mentioned in Stalker in the Shadows. :)

Are you good at naming characters? I’m always working on a new manuscript, so keep your eyes on my blog and Facebook for when I post for help!