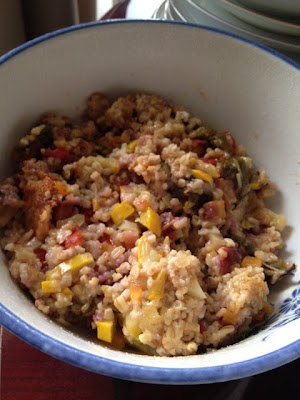 This all started because I made vegetable risotto in my rice cooker, although I added more veggies than the recipe indicated, which added more water to it, which made the rice mushy.

I did a combination of the risotto recipe from the cookbook and the savory steel cut oatmeal recipe. Here it is:

1 tablespoon butter
1 minced garlic clove
1/2 diced onion
1 cup chopped leafy greens--I used kale, you could also use spinach, chard, beet greens instead
1-2 small carrots, finely diced, or 1 large carrot finely diced
1-2 small summer squash or zucchini, finely diced
1-2 small tomatoes, diced
(Note: You can pretty much add any veggies you like, although I’d suggest you chop them up well so they’ll cook thoroughly. If you like them more crunchy, you may want to chop them less fine and see if that gives them a harder texture, but I haven’t tried that.)
1 1/2 cups chicken broth
1 cup steel cut oats
1 teaspoon salt
1/2 teaspoon cumin (I actually used more than a 1/2 teaspoon, I just kind of shook it in)
Dash of cayenne pepper

I threw the butter, garlic, and onions in the rice cooker and hit the start button, then closed the lid and let it cook while I cut up all the veggies.

Then I added all the veggies, gave it a good stir, and added the rest of the ingredients. I stirred it all and reset the rice cooker. I put it on the regular rice setting.

After cooking, I stirred it again and then covered it and let it steam for 10 minutes before eating. It ended up needing a little more salt for my taste, but for those of you who don’t want too much salt in your diet, you can omit the salt entirely.

I thought it tasted pretty good. It had a texture similar to rice or risotto in that it was sticky, but it had that nice steel cut oats texture. The veggies and spices made it a good savory side dish, although I ended up eating it for breakfast.

It had a slightly Southwestern flavor to it. I think adding corn kernels would have been tasty. If you don’t like that style, you could probably omit the tomatoes and switch the cumin to something else to make it less Southwestern.

I would definitely make this again. I rather like eating savory steel cut oats for breakfast, and this ensures I get some veggies with breakfast. I might try adding cheese into it before eating next time.

If you want to buy The Ultimate Rice Cooker Cookbook, links are below. Despite not liking their savory steel cut oats recipe, I’ve really loved this cookbook. So many of the recipes are fantastic and I love being able to cook so many things in my rice cooker. It’s incredibly convenient.