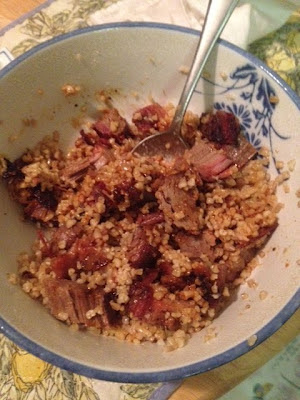 Every so often I like to try unusual things, and I just got this Rice Cooker cookbook which had an unusual savory steel-cut oatmeal recipe that I wanted to try. It has cayenne, nutmeg, a little honey, olive oil, and salt. I thought that the heat and the sweetness might compliment the barbecue sauce used on the beef brisket that Captain Caffeine made.

The texture of the oatmeal was actually rather good. It was more like bulgar or quinoa than your typical mushy oatmeal.

However, the oaty flavor was still really strong, and it overpowered the smoked brisket and the barbecue sauce. Blech. I ended up picking out the brisket and eating only that.

I thought perhaps the oatmeal was old and turning rancid, but the expiration date on the package says 2013 so I guess that’s not it.

Anyway, although this recipe was a bust, I’m glad I at least tried it. I only lost about a cup of oatmeal.