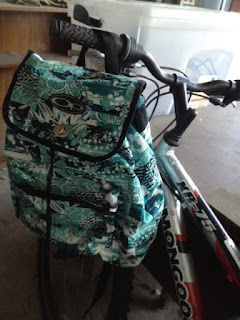 Yesterday, I went bike riding for the first time in literally YEARS.

For a while I hadn’t had a rideable bike because my last one was old and needed new tires and (surprise!) I was too lazy to get new ones.

Then Captain Caffeine found a really nice bike at Goodwill for only $50. Of course, this one also needed new tires (or at least new treads) but after I bought them, the Captain put them on my bike for me and filled up the tires.

So then I had to buy a bike helmet that didn’t look like it had been through WW3. My last helmet had been with me since college, and I’d been in a couple accidents with it. I think I’m technically not supposed to use it after it’s been in an accident, but I was (surprise!) too lazy to go get another one, plus at the time I had my old unrideable bike and saw no need to get a new helmet.

So yesterday, finally, in an effort to be green and save gas, I took my new bike out to the grocery store. I was REALLY shaky on that bike. People who say you never forget how to ride a bike are LYING. I was pretty nervous riding to the store, but luckily didn’t get hit by a car and (an event even more likely) I didn’t hit anything like a phone pole or a stoplight or a person.

I picked up my groceries and packed them in my nifty Hawaiian backpack and went home. Hooray!

Then I realized my back hurt. What’s up with that? Isn’t bike riding supposed to be good for you?

And, er (TMI warning) that bike seat was super hard! Oh my gosh, my butt hurt so much. Do I need a new seat or do I just need to get used to the one I have?