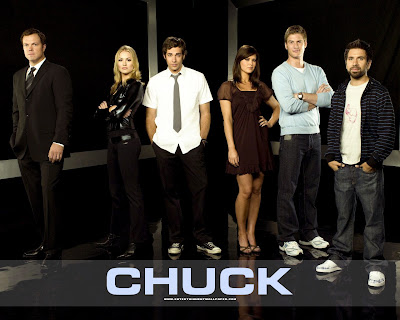 I absolutely adored the TV show Chuck. So in Protection for Hire, Charles’s alias at the party, Charles Carmichael, is in honor of Chuck Bartowsky’s favorite alias from the TV show.

There also used to be a Captain Awesome reference, but unfortunately my editor took it out. So here’s the original excerpt from chapter 23:

Josh led Velma out onto the dance floor and Charles drew Tessa into his arms.

He felt as if a circle had been completed.

She looked up at him, her brown eyes glowing with flecks of emerald. He thought she might have stopped breathing—he knew he did. He’d been wanting to hold her since the moment he saw her at the foot of his stairs, regal in that blue gown. She hadn’t been transformed so much as enhanced—before, her confidence had been in her walk and her athletic grace, but tonight, it shone from every pore, in the tilt of her chin, the sway of her hips, the toss of her head. His hand at her waist tightened.

“The music’s started,” she murmured, and he realized they’d been standing still at the edge of the dancing area. He swept her into the slow, sensuous tango.

“Needed rescuing, did you?” she asked.

He frowned at her. “You obviously didn’t.”

“Oh, Josh already knows who we are and what we’re doing here.”

She explained about Karissa.

“Josh assured me that they could torture him like Wesley in The Princess Bride, but they’d never get him to tell what he knows about us.”

“Oh. That completely reassures me.” Then again, she’d gained an ally tonight with Captain Awesome over there, whereas Charles had spent most of his time trying to keep Ms. Crackhead from throwing him over her shoulder and hoofing it out of the ballroom.