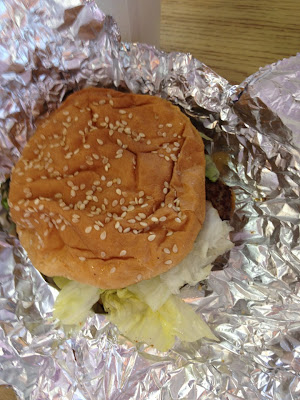 I knew from the Yelp reviews that some people loved Five Guys and some people hated them. I didn’t hate them, but I was disappointed in the food.

Also, there was one order ahead of us and no one behind us, they were in a lull between rushes of people. I would have though that with only two orders, they wouldn’t mess up anything.

It wouldn’t have been a problem if we could just exchange buns or patties, but the A-1 steak sauce had been slathered between a patty and the lettuce, which was also next to the mayo. I hate A-1, and Captain Caffeine gets sick if he eats mayo. So even though we exchanged patties and I tried to wipe the A-1 off, I could still taste it. Yuck!

I considered asking Captain Caffeine to complain to a manager, but the bigger problem was that the patties themselves were really dry. Even if we’d gotten the correct orders, I wouldn’t have been happy with the burger because of the dry patties.

Other people on Yelp complained about dry patties, but others had said the patties were great, so before we went, I wasn’t sure who to believe. I am now with the ones on Yelp who say the patties are dry.

However, making up for everything was the fact that their french fries are DA BOMB!!!! The potatoes have the skin on and frying them in peanut oil makes them taste completely awesome.

Would I go back? Maybe only for the fries, definitely not for the burgers.

I was also really proud of myself because I only ate about 2/3 of the burger and only 20 strips of fries rather than the entire thing!