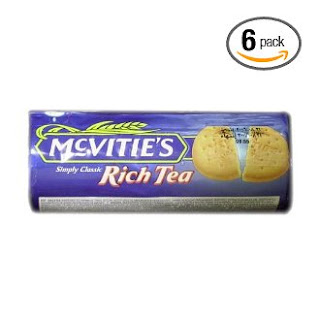 I mentioned earlier about the dark chocolate digestive biscuits I bought due to the Betty Neels books I’ve read. I also bought these rich tea biscuits which I’d read about also.

McVitie’s is apparently a well-known maker of digestive biscuits (and I think they’re the ones who originally came up with the chocolate digestive biscuit) so I naturally had to try their brand of tea biscuits.

They remind me of a slightly sweet cracker, but more dense than a soda cracker. I have to admit, they are PERFECT with tea because you can dip them and they are just sweet enough to satisfy without being overly sweet.

They also settle my stomach as well as a soda cracker, which I discovered yesterday with the lemon juice stomach problems I had. I ate a couple tea biscuits and my stomach felt much better.

Anyone else had these? I really like them! Maybe not as much as the McVitie’s digestive biscuits, but they’re still really tasty.