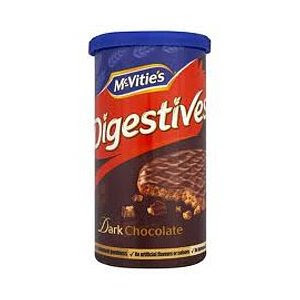 I’ve come across “digestives” in the Betty Neels books I’ve read and finally today I looked up what it was. They’re cracker-like cookies called “biscuits” in the UK although they’re nothing like Southern-style biscuits.

I had read about chocolate digestives and decided to try some, and lo and behold, Amazon has them. So I bought some.

And according to Wikipedia, they’re called “digestives” because originally they were thought to have antacid properties due to the sodium bicarbonate used to make them. I think these days, the ingredients make them a decent source of fiber.

Anyone had these before? I just hope the weather stays cold so they won’t melt before I get them.