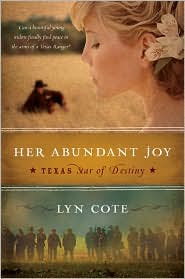 Can a beautiful young widow find peace in the arms of a Texas Ranger?

In 1846, young widow Mariel Wolfe survived the grueling voyage from
Germany to start a new life in the "promised" land of Texas. Forced by
circumstances to become a servant, Mariel is now determined to quit a
harsh master. But how can a single woman face the frontier on her own?

Texas Ranger Carson Quinn is responsible for leading her party of
German immigrants safely through dangerous Comanche-held territory. As
he watches Mariel hold her head high in spite of everything, he will
stop at nothing to protect her.

But war is brewing: Mexico will not accept the U.S. annexation of the
young Texas Republic without a fight. Honor bound to fight for Texas,
Carson's deepest longing is to lay down his rifle. As Mariel and
Carson fall deeply in love, could her painful past or this new war
destroy all their hopes? Will the tide of history sweep them far from
peace, far from a life together?


Her Abundant Joy by Lyn Cote Final book of Texas Star of Destiny series
Mark the perfect man, and behold the upright:
for the end of that man is peace. Psalm 37: 37

Chapter One
Texas, April 1846
Gazing ahead through the pouring rain, Carson Quinn tried to take a deep breath and couldn’t. Searing tightness in his chest reminded him--he hadn’t been able to blot out the images. Images the past week with Blanche had blistered into his mind, knotted around his lungs. Late on his second day in the saddle, all he was looking forward to was a hot bath and a warm bed at one of Galveston’s inns, comfort for his body if not his spirit.
Draped within the dismal mist, he nudged his horse to churn quicker through mud and murky puddles over the last half-mile into the seaport. Amid the jumble of buildings, strange people clogged the streets. He pulled up on his reins. Something had happened here. Something out of the ordinary.  Something that might force him out of his own misery into the misery of others.
People huddled under dripping trees, under canvas, and standing under the overhanging roofs of stores, everyone drenched.  Rainwater funneled down his leather hat as he steered his horse through the throng. Those who peered up at him looked pale, forlorn and sickly. They weren’t dressed like Texans, or even Americans—
He inhaled a shallow breath. He still thought of Americans as separate from Texas, from him. But Texas was part of the US now. Had been for over two months. Who were these people?

Buy from Barnes and Noble
Buy from Christianbook.com
Buy from Amazon
Buy from Books a Million