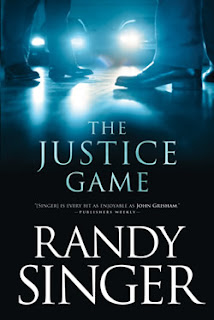 The Justice Game
by
Randy Singer

After the target of an investigative report storms a Virginia Beach news studio, he executes one of the anchors on live television before the SWAT team is able to take him down. Following the victim’s funeral, her family files a lawsuit against the gun company who manufactured the killer’s weapon of choice.

The lawyers for the plaintiff and defendant—Kelly Starling and Jason Noble—are young, charismatic, and highly successful. They’re also easy blackmail targets, each harboring a personal secret so devastating it could destroy their careers.

Millions of dollars—and more than a few lives—are at stake. But as Kelly and Jason battle each other, they discover that the real fight is with unseen forces intent on controlling them both.