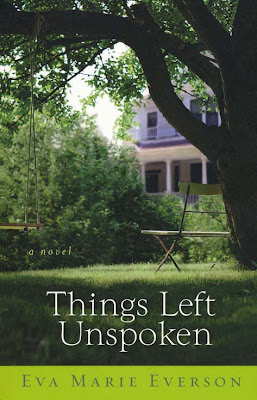 Every family--and every house--has its secrets. Jo-Lynn Hunter is at a crossroads in life when her great-aunt Stella insists that she return home to restore the old family manse in sleepy Cottonwood, Georgia. Jo-Lynn longs to get her teeth into a noteworthy and satisfying project. And it's the perfect excuse for some therapeutic time away from her self-absorbed husband and his snobby Atlanta friends.

Beneath the dust and the peeling wallpaper, things are not what they seem, and what Jo-Lynn doesn't know about her family holds just as many surprises. Was her great-grandfather the pillar of the community she thought he was? What is Aunt Stella hiding? And will her own marriage survive the renovation? Jo-Lynn isn't sure she wants to know the truth--but sometimes the truth has a way of making itself known.

It snowed the day we buried Uncle Jim. Not the kind of snow that flurries about your face or drives itself sideways, turning the world into a blinding sheet of white. This was angels dancing on air.

When the first flake touched my cheek I felt the icy wet kiss and looked up, past the rows of granite markers—some shiny as silver and others cracked and gray—and into a fortress of old oaks, Spanish moss dripping from barren limbs. Another flake landed on my eyelashes. I batted them, then raised my gloved hand to brush it away.

I looked at my mother, who caught my movement. We sat shoulder to shoulder in the front row of chairs reserved for the family, as though we were aristocrats who’d managed to snag the best seats at the opera. Our eyes locked as she reached for my hand, then squeezed.

I took a deep breath and looked away. The pain of loss in her eyes was too much; especially at this moment, with Great-uncle Jim not six feet away, entombed by polished cherry and cold white satin.

A gust of wind blew against my back, and I glanced toward the open sky nearly white with the cold. I lifted my chin, and the breeze skipped on my shoulder and tickled my ear. “I’m not there . . .”

“Hmm?” My voice was barely audible, but my mother turned and gave me a harsh look.

“Jo-Lynn.” She whispered my name in admonishment, as though I were a child, then nodded toward the youthful pastor who stood shivering on the other side of the casket, reading from a book of prayers. He’d never once laid eyes on Uncle Jim; other than speaking recitations, there wasn’t much else he could say.
••
Uncle Jim had never been one for going to church. For the life of me I couldn’t remember a single time I’d seen him sitting in one of the hard pews at Upper Creek Primitive Baptist Church or standing rigid with a hymnal spread against his open palms. But I’d heard him talking to God in the fields behind the big house; listened in the cool of the evenings as he sang, “In the sweet by and by . . .” while rocking in one of the front porch rockers that lined the wraparound of the old Victorian he and Aunt Stella called home.

He wasn’t a “religious” man, but his prayers before dinner were more like conversations with the Almighty than “grace.”

“Most beloved heavenly Father,” he would begin, then he would thank God for every single item on the table, for the hands that prepared them (typically Aunt Stella’s), and for those who would be blessed by them. “Keep our bodies healthy for thy service on earth and purified for thy kingdom in heaven.”

I remember raising my head ever so slightly, peeking through one eye at him. His ruddy face and drooping jowls quivered. His eyes were squeezed shut; tiny slits behind black-rimmed glasses. His hair, dark blond and thinning, shimmered in the glow from the overhead kitchen light.

At the big house, breakfast, lunch, and dinner were eaten in the kitchen. We never ate in the formal dining room, though it was certainly laid out, ready for guests. Uncle Jim said it was just a waste of space, and if he’d built the house, he would have left off that room. Growing up, I imagined that if I’d built the house, I’d use it for every meal.

My great-grandparents—Aunt Stella’s mother and father—had built the house before they married in the late 1800s. It was 1896, to be exact, when my grandmother came to live here as a bride at sixteen to her dashing “older” groom, ten years her senior. As the story goes, he met her, fell in love with her, married her against the wishes of her family, and then carried her over the threshold of this sprawling two-story with tucked-away rooms, long hallways, and an honest-to-goodness brick well on the back porch. Still to this day one can drop an old wooden bucket down into its depths and then, using a beat-up, long-handled tin dipper, sip of something so sweet and clean it almost doesn’t seem real. Liquid heaven, Uncle Jim used to call it.

In the early days, beyond the rose-covered trellises on the back porch, perfect rows of vegetables for canning and freezing were planted, both for our family and for neighbors in need when there was abundance. Standing behind the small garden was the farm. It extended alongside the highway that ran beside the left side of the house. The crops stretched toward the horizon and out of sight, interrupted only by the leaning of an old barn, the rise of a tin silo, or the deliberate movement of a John Deere tractor.

But those days were long gone. That was a time when everything seemed to be about life and living. These past few decades, the earth hasn’t been tilled or loved. No planting, no praying for rain, no harvesting. Nothing to show for what had been except the gray of the packed soil and an occasional twig rising up from out of the ground, a remnant of the last crop. Of what my great-grandparents had built, only the big house remained, and it was a part of the remnant of what had at one time been a thriving farm in Cottonwood, Georgia.
••
I blinked several times and brushed away those memories of life. There was too much heartache in the moment to allow myself to remain within them. Now was a time to reflect on death and dying. I could sit here and commiserate, and no one would be the wiser as to the depths into which I was falling. But I knew . . . I knew that when the funeral was over—when the casket had been lowered into the ground and the last clump of dirt had been patted down and the clusters of floral arrangements had been placed strategically about the mound—I’d see that old, proud house filled with family and friends eating fine Southern cooking off Chinet plates, reminiscing about the time Uncle Jim did thus and such and then throwing back their heads and bellowing at their memories.

But I . . . I would move about the house I had loved my whole life, touching old photographs—their frames caked with dust—seeking a flicker of solitude where I could grieve in my own way for the man I’d loved more like a great-grandfather than a great-uncle. A man who, it seemed, was always right where I needed him to be.

Except now. When I needed him most.