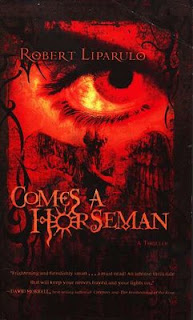 Comes a Horseman
by
Robert Liparulo

The ancients saw Death as a blazing figure on horseback, swift and merciless.

Those facing the black chasm often mistook their pounding hearts for the beating of hooves.

Now, two FBI agents pursuing a killer from a centuries-old cult realize they have become his prey.

To survive, they must ignore their own fear, their own hearts pounding in their ears...

Buy from Christianbook.com
Buy from Amazon