Nothing But Trouble! by Susan May Warren 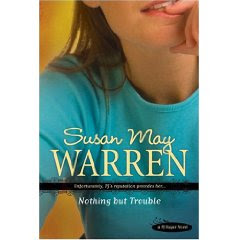 After traveling the country for ten years hoping to shake free from the trail of disaster that’s become her life, she needs a fresh start.

The last person she wants to see when she heads home for her sister’s wedding is Boone—her former flame and the reason she left town.

Her best friend’s husband absolutely did not commit the first murder Kellogg , Minnesota , has seen in more than a decade.

What PJ doesn’t know is that when she starts digging for evidence, she’ll uncover much more than she bargained for—a deadly conspiracy, a knack for investigation, and maybe, just maybe, that fresh start she’s been longing for.

Susan May Warren is the award-winning author of seventeen novels and novellas with Tyndale, Steeple Hill and Barbour Publishing. Her first book, Happily Ever After won the American Fiction Christian Writers Book of the Year in 2003, and was a 2003 Christy Award finalist. In Sheep’s Clothing, a thriller set in Russia , was a 2006 Christy Award finalist and won the 2006 Inspirational Reader’s Choice award. A former missionary to Russia , Susan May Warren now writes Suspense/Romance and Chick Lit full time from her home in northern Minnesota .

Also! It's launch month for my new book, Nothing But Trouble, and I'm running a "sweet" contest when people go "Hunting for Trouble" in their local bookstore! Click HERE for the Contest details!

Where did the idea for PJ Sugar come from?

Every author dreams of a moment where someone says something, or they see something on the news, or in a newspaper and it springs out at them, nearly shouting – STORY IDEA! This happened to me a number of years ago while talking to friends about their daycare situation, and how one of the parents ended up being a murder suspect! Scary! But an interesting idea. About that time, I was a mom who wore many hats – homeschooling mom, writing teacher, speaker, children’s church leader, -- and it occurred to me that a mother really has to be a sort of PI. Not only taking on different roles, but sleuthing out daily household mysteries like, who ate the last of the peanut butter (and put it back in the cupboard?) and whose socks are laying in the middle of the floor, and finally…(in our house), who let the dog (and her muddy feet!) in the house! PJ is the alter-ego in every mom, that super-hero inside of us that allows us to have esp (I know you’re not really done with your homework!), or have “eyes in the back of our head,” (stop poking your sister!) or even figure out how to whip together an award-winning science project the night before the fair. PJ just applies all those skills to bad guys and figuring out the truth.

PJ Sugar is also a woman who wants to be all things to all people. She wants to be her nephew’s champion and her sister’s best friend, and her mother’s favorite daughter, and Boone’s special girl, and the hero of her hometown. That’s not too much to ask, is it? Maybe…because God wants her to be His girl, and satisfied in who He made her to be. And that is a journey for all of us PJ Sugars.

A note from Susan May Warren

Sometimes, do you feel like you just don’t fit in? You look around you and if anyone knew how difficult it was just to put yourself together, to smile when you feel completely overwhelmed, to even figure out what you were making for supper, they’d know what a mess you were. Maybe you totally relate to those words in 1 Peter – God’s elect, strangers and aliens in the world. Do you feel like when you look in the rear view mirror, all you see are your mistakes?

Maybe not. But if so, then PJ is your gal. I wanted to write a story about the person in so many of us who just wants to get it right…but can’t seem to stay out of trouble. My friend and I have what we call the “stupid mouth” club…and we report our weekly foibles (usually on Monday, after Sunday church!). PJ is our charter member. She’s the girl that changes her mind, always hopes for the best, is always discovering that she is just a little different than everyone else. PJ is us.

And that’s good news. Because God loves PJ. He loves her messiness, and her impulsiveness, her heart bent toward others, the hope that fuels her actions. And He has a plan for PJ – one that includes her weaknesses as well as her strengths.

I wrote PJ for everyone who feels just a little messy, just a little like they can’t quite get it right. And who needs to hear that God loves them. Period. Full stop. Hallelujah.